How to Measure a Giraffe? All About the World's Tallest Animals

This is a vulnerable species due to hunting. Their name comes from Arabic, meaning "high." A calf measures 6 feet when born while just the adult's neck exceeds 6.5 feet. 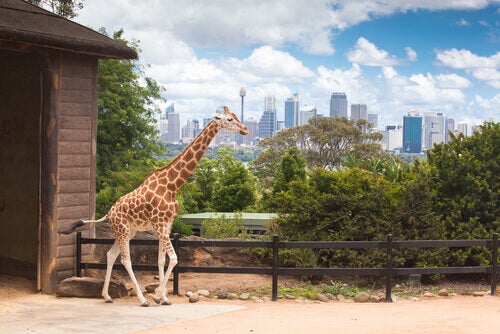 We know that giraffes are among the tallest animals in the world. With their necks and elongated legs, these mammals really can reach the heights. But can we really determine the height of a giraffe?

The giraffe, whose scientific name is Giraffa camelopardalis, is an artiodactyl. They are also ruminant land mammals and belong to the Giraffidae family. This species is native to Africa and they live mostly in grasslands, open fields, and savannahs.

Their name comes from the Arabic word jiraffa, which means “high.” In fact, just an adult’s neck exceeds 6.5 feet. This remarkable length is the result of a genetic mutation that generated a disproportionate lengthening of their vertebrae.

Currently, environmental organizations classify giraffes as a vulnerable species. This is mainly due to the practice of sport hunting in African savannahs. The total giraffe population on the African continent has declined more than 40% in the past 20 years.

Although giraffes are herbivorous mammals, they occasionally consume remains of meat from dead animals. Experts suggest that they may have adopted these habits as a way to get protein when there was a shortage of certain vegetables.

Giraffes establish hierarchical societies. In fact, dominant males earn their place through tough combat known as “necking.“ As the name suggests, they use their long, muscular necks as a weapon to fight.

The females are responsible for caring for the young. Babies are born after a gestation period of between 400 and 460 days. Their bond with each calf usually lasts until the next calving. In addition, they’re able to breastfeed babies from one month to a year.

Tallest animals: So how tall is a giraffe?

Adult males are usually between 16 to 18 feet in height. However, there were several special specimens that reached 20 feet tall. Giraffes’ body weight can vary between 2,000 and 3,500 pounds. Females are slightly smaller and grow to 11.5 to 15 feet tall with an average weight of 1,650 to 2,200 pounds.

A surprising fact about the height of a giraffe is that young are born an average of 6 feet tall. They then grow at an accelerated rate until adulthood. As a result, this makes the first months of their life somewhat awkward.

The five tallest animals in the world

If you’re impressed by the height of a giraffe, let’s take a look at some of the other tallest animals, however, no other species can match the impressive figures of up to 20 feet tall!

Elephants are not only impressive for their physical dimensions, but also their intelligence and sense of empathy. Adult African elephants are between 8 and 13 feet tall and weigh up to 14,300 pounds.

In fact, elephants are the largest land mammals on the entire planet. They also have remarkable cognitive abilities comparable to primates and dolphins.

Although these are smaller than their African relatives, Asian elephants have similar qualities. An adult specimen usually measures between 6.5 and 10 feet in height and weighs up to 11,000 pounds. We can also differentiate between the two species by comparing their ears.

The ostrich is the only bird among the five tallest animals on the planet. This unique animal can measure between 6.5 and 9 feet in height and weigh 280 pounds.

One interesting fact is that ostriches have the largest eyes among land mammals.

The American elk completes our ranking of the tallest animals in the world. An adult male is between 5 and 6.5 feet tall and weighs about 1,700 pounds.

This animal’s most characteristic feature is its huge horns, which can measure up to 6 feet. They live in the United States, Asia, and Europe.

Have You Met The Tallest Dog in The World?
Major, a 1.25 meters tall Great Dane, is waiting to be oficially be declared the tallest dog in the world, according to Guiness Records. Read more »
Link copied!
Interesting Articles
Wild Animals
5 Animals that Live in Grasslands