After discovering these interesting facts about sea urchins, you'll see that nature never ceases to amaze. 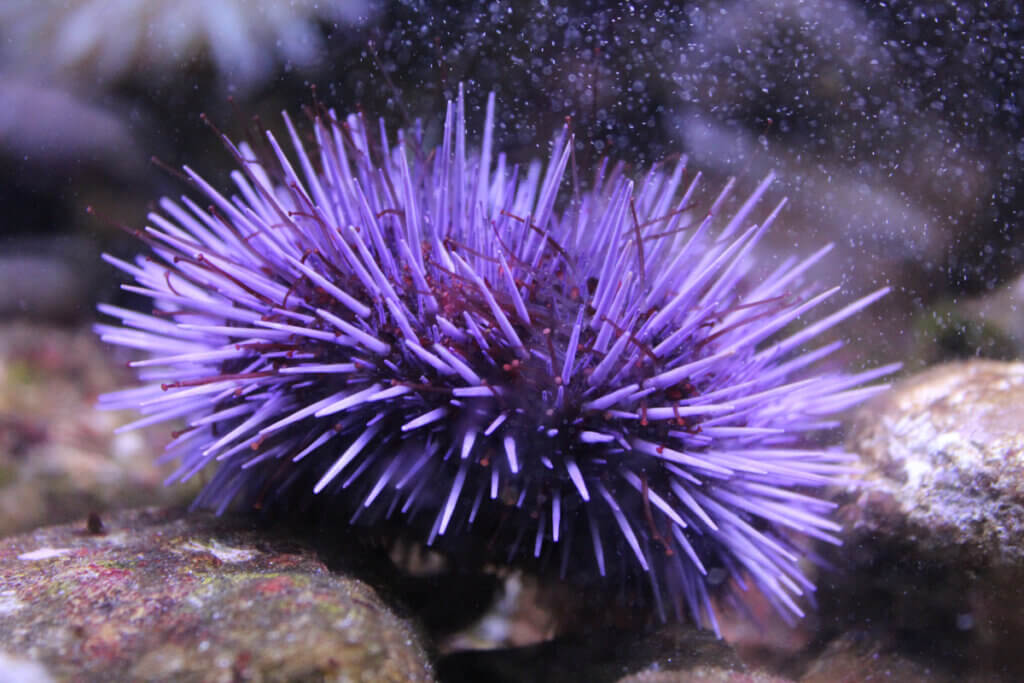 Echinoids, commonly known as sea urchins, are a class of echinoderms. These animals are very different from other groups, mainly because of their radially segmented body rather than the typical bilateral arrangement. Today, we want to invite you to discover some interesting facts about sea urchins.

These small animals only live in the oceans, just like the rest of the animals of the same phylum. They’ve never colonized fresh waters, so to observe them you have to go to the sea. And, if you do so with diving or snorkeling equipment, all the better! Below, we’ll bring you five curiosities about these beings.

1. A sea urchin’s spines are part of their skeleton

One of the greatest curiosities of sea urchins is that they have an endoskeleton. In spite of this, they’re not vertebrate animals, but rather invertebrates. In other words, they don’t have a spine or embryonic development like that of mammals or birds, for example.

Under the epidermis, sea urchins have a skeleton that consists of plates that are fused together, which prevents movement. These plates are also called calcareous ossicles. In other types of echinoderms – like starfish – they’re articulated and allow the animal to make movements.

On many occasions, although not always, the calcareous ossicles have thorns or tubers, that reach the exterior through the epidermis. For this reason, many sea urchins have a characteristic spiny appearance.

Although the sea urchin’s fused endoskeleton prevents the animal’s movement, this doesn’t mean that they can’t move. In fact, the most important and exclusive characteristic of this group of animals is the presence of an aquifer or ambulatory system.

From the interior of its body, called the celoma, there’s a system of tubes or channels that have appendages that protrude towards the exterior. These channels are full of salt water thanks to a special plate in the endoskeleton, called the madreporite. This plate is located in the upper part of the urchin, next to the anus.

Through the madreporite plate, seawater enters into the sea urchin. This gives turgidity to its ambulatory feet that, thanks to a rudimentary nervous system, gives these animals the ability to move, albeit slowly.

Among the interesting facts about sea urchins that we can’t fail to mention is that some of them have deadly poisons. Echinoids have structures called pedicels, which are located around the spines in the entire upper region of the animal. These formations can have different functions, among which are defense, food, or cleaning.

Each pedicellaria consists of three parts: head, neck, and pendulum. The head usually consists of three calcareous ossicles and, inside it, there are sensitive cells that indicate when these should open and close.

Normally, pedicellariae are exclusively responsible for cleaning the urchin. Thanks to them, the animal is able to feel its body surface, looking for any parasite that may have settled.

At the same time, the pedicellariae can contain poison glands that activate as a means of defense. When a person tries to catch a poisonous sea urchin or when they step on it unintentionally, the invertebrate injects the poison, which is very painful and even deadly.

Like fish, sea urchins breathe through gills but, unlike fish, these invertebrates can also excrete waste substances through them.

Around the mouth, in the lower part that we’ll speak about next, these animals have five gills that are evaginations of celoma. Through them, they carry out the gaseous exchange with salt water and, in addition, they use them to discard certain substances that don’t come out through the anus.

Inside the body and next to the opening that’s effectively the sea urchin’s mouth, there’s a structure called Aristotle’s lantern. This is formed by five teeth that, together with the endoskeleton and the muscles around them, give them support.

Sea urchins use Aristotle’s lantern to scrape off algae on the substrate or to break up food into smaller pieces. They also use it to attach to the ground or to climb on certain surfaces.

The sea urchin’s mouth communicates with the digestive tract which is composed of a large stomach and finally with the anus in the upper zone.


There’s no doubt that sea urchins are spectacularly strange animals. If we were to go into each different existing species, the interesting facts about sea urchins that we could share would be almost infinite.
Starfish Regeneration: The Secret of Life?
If you've ever wondered why it is that starfish can replace a lost arm and humans can't, you're not alone. Starfish regeneration is a mystery. Read more »
Link copied!
Interesting Articles
Invertebrates
Cockroaches: 6 Types and Characteristics