Characteristics and Habits of Sea Stars

Sea stars, also known as starfish are marine creatures that inhabit both seas and oceans. Unfortunately, their population is declining due to increasing levels of pollution. 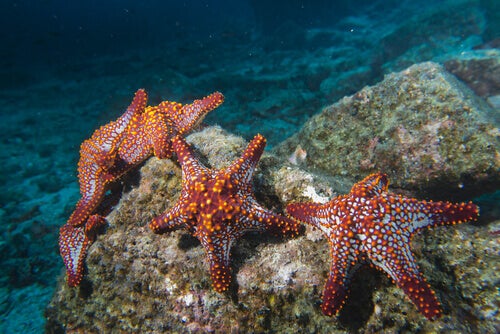 Sea stars (or starfish) are invertebrate animals characterized by five arms that end in a point. They’re named after their shape, obviously. Would you like to know other interesting facts about this species? Continue reading!

This animal belongs to the family of echinoderms. This is a group of marine animals with a set of unique physical features: skeletal system, integument, symmetry, and a vascular system.

Note that starfish has no brain per se. They do have a rather complex under skin nervous system in the form of networks and rings. This is what sends information to the arms for these to move.

This curious marine animal is highly sensitive to light, temperature changes, and even to different marine currents. Thus, they won’t survive out of saltwater. This animal is also quite sensitive to touch.

Like the other echinoderms, sea stars have an interesting locomotion system: they move sideways with their arms, like a wheel. They can also regenerate their limbs when they lose them.

Starfish have a simple eye at the end of each one of their arms and can perceive light and darkness. They can also detect the movement of other things or beings.

In addition, their body wall is covered with granules, tubers or spines; these protrusions allow the animal to obtain oxygen from the water.

Currently, we know about 2000 different species of starfish and all of them inhabit the sea or the ocean. In fact, the highest density of specimens is located in the tropical areas of the Indo-Pacific. However, there are some who inhabit cold and temperate waters.

Starfish can live at the bottom of the sea up to 20000 feet deep.

These animals mate both sexually and asexually. The first instance requires a male and a female — which aren’t externally distinguishable from each other as the sexual organs are internal. There are also hermaphrodite subspecies that produce sperm and eggs at the same time.

Fertilization goes external once the arms expel the gametes. The embryos and larvae stick to the rocks in order to develop under the watchful eye of their parents. And, as we mentioned before, the success of sexual reproduction will depend, to a great extent, on the temperature of the water.

In contrast, asexual reproduction takes place when a sea star divides and new specimens emerge from the partition. This happens when there’s plenty of food available.

This creature is a generalist predator that takes advantage of the slowness of prey that swim or rest on the seabed. Some subspecies choose animals or plants in a state of decomposition while others feed on organic particles in suspension.

As for their digestive system, they ingest food through a hole in the center of their body. Then, it goes through a rather short esophagus and two stomachs. This animal digests food outside their body in case there’s another meal that’s larger than the size of their mouth.

The effect of contamination on sea stars

Unfortunately, the starfish are threatened by the industrial world. On the one hand, water pollution wipes them out, as they can’t find a way to process the toxins and be able to breathe. You must keep in mind that sea stars don’t have a filter in their respiratory system.

On the other hand, their increasing capture to be sold as decoration or as a souvenir at the beach stores continues to progressively reduce their population. They’re not yet on the official list of endangered animals but are definitely an endangered species.

Starfish Regeneration: The Secret of Life?
If you've ever wondered why it is that starfish can replace a lost arm and humans can't, you're not alone. Starfish regeneration is a mystery. Read more »
Link copied!
Interesting Articles
Invertebrates
What Are Annelids? Discover These Segmented Worms

Invertebrates
What Are the Differences Between Octopuses and Squid?

Belonging to the order Passeriformes, this great black bird has gained many different characterizations over time. Scientists are currently undertaking more and more studies in order to verify its capacity…

Illnesses and Treatment
Bovine Sadness Complex: What Is It?

Bovine Sadness Complex is the colloquial form for a group of diseases that regularly affect cattle. It's a syndrome caused…

Animals
Discover the Fauna of the Arabian Peninsula