Hermaphrodite Animals in the Invertebrate World

Many invertebrates and a significantly smaller number of vertebrates are hermaphrodites. Let's learn more about these fantastic animals! 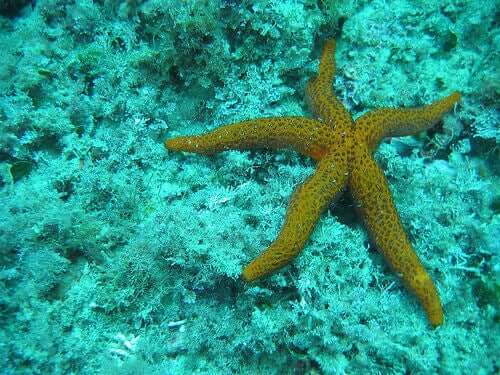 Some species have reproductive organs associated with both sexes and can produce both female and male gametes. Only some hermaphrodite animals can self-fertilize themselves. However, if they’re joined with another specimen then they can adopt the sex that’s needed. In this article, we’ll tell you more about these amazing living beings.

Things to know about hermaphrodite animals

The main characteristic we can point out regarding these animals is that they have both male and female sex organs integrated into their bodies. Because of this condition, they can produce cells of both sexes depending on what the needs are. For instance, if one specimen finds a male individual, then it will use its female organs and vice versa.

These animals have the ability to produce gametes of both sexes and, while some can fertilize themselves, in most cases they need another specimen to reproduce. Almost all hermaphrodites are invertebrates such as fish or insects, and there are no mammals on earth that possess this ability.

There are two types: sequential and simultaneous hermaphroditism. The first type includes species that are born with a specific gender and will change it to the opposite during adulthood. The different types of change are:

In the case of simultaneous hermaphrodites, they have both gender’s sexual organs, which they can alternate depending on the moment, situation or ‘partner’ they have found to reproduce with.

Which animals are hermaphrodites?

These animals’ sex isn’t determined by the X and Y chromosomes, as is the case with mammals. Instead, their sex will be determined by their organs’ maturity or their particular situation. Examples of hermaphrodite animals include:

These spiral-shelled mollusks can call that shell their “home”. They possess two pairs of antennas that they use for orientation and sight. In addition, the snail is one of the most famous hermaphrodite invertebrates out there. In other words, they can produce both eggs and sperm. However, they must be coupled with another specimen to achieve fertilization.

Garden snails inseminate each other to fertilize eggs internally, both during fall and spring. Copulation takes place at night time and can last up to seven hours. After this time, both will dig a hole in the ground to lay the eggs, which will remain buried for 15 days until they hatch.

The starfish is one of the many species that live on the ocean’s seabeds all over the world. It also happens to be a hermaphrodite animal. They usually have five arms, hence the name ‘star’, and can reproduce both sexually and asexually.

However, their reproductive organs are often small or housed on the inside of the animal’s body, so it’s difficult to tell them apart even if you flip the starfish over to look at its underside. However, when they spawn (release gametes) you can see under the microscope whether they have released eggs or sperm.

It’s curious, nevertheless, that some starfish are born as males and then become females as they grow older.

As with other crustaceans, shrimps are also hermaphrodites. In some cases, they are born males and as they age or because of certain circumstances of hierarchy, they later become females. In addition, they’ll incubate the eggs once fertilized, which remain attached to their swimming legs until they hatch.

These parasites, also known as ‘tapeworms’, can cause disease in humans and animals and also have both sexes. Inside them, there’s a set of complete organs of each gender:  that is, testicles and ovaries. One of the main characteristics of tapeworms is that they can self-fertilize, although they can also procreate by the crossing between two individuals.

These species’ sexual organs are one of the most complex ones in the animal kingdom, as opposed to their simple tube-shaped bodies. Flatworms are hermaphrodites, reproduce internally, and have copulatory organs. The male inserts the cirrus or penis to pour sperm into the female, which produces eggs to then send to the uterus.

Worms can also be split into segments and each of them serves as a ‘container’  to lay eggs. Sometimes they can reproduce asexually, and sometimes by self-regeneration.

The distribution of self-fertilization rates among hermaphrodite animals is similar to that of plants. This may mean that similar processes are operating to direct the evolution of selfing in animals and plants.

What do you think of these weird but fascinating animals? We hope you enjoyed learning about them today. Until next time!

Tapeworms in Dogs: Symptoms, Diagnosis and Treatment
Tapeworms in dogs are a common ailment. While they're not life-threatening, they can be difficult to eradicate. We'll tell you everything you need to know. Read more »
Link copied!
Interesting Articles
Invertebrates
Discover the Golden Tortoise Beetle