Tarantulas that eat birds, others that swim, some that are capable of whistling, and even more that produce stinging hairs. These are some of the most striking characteristics of giant tarantulas. 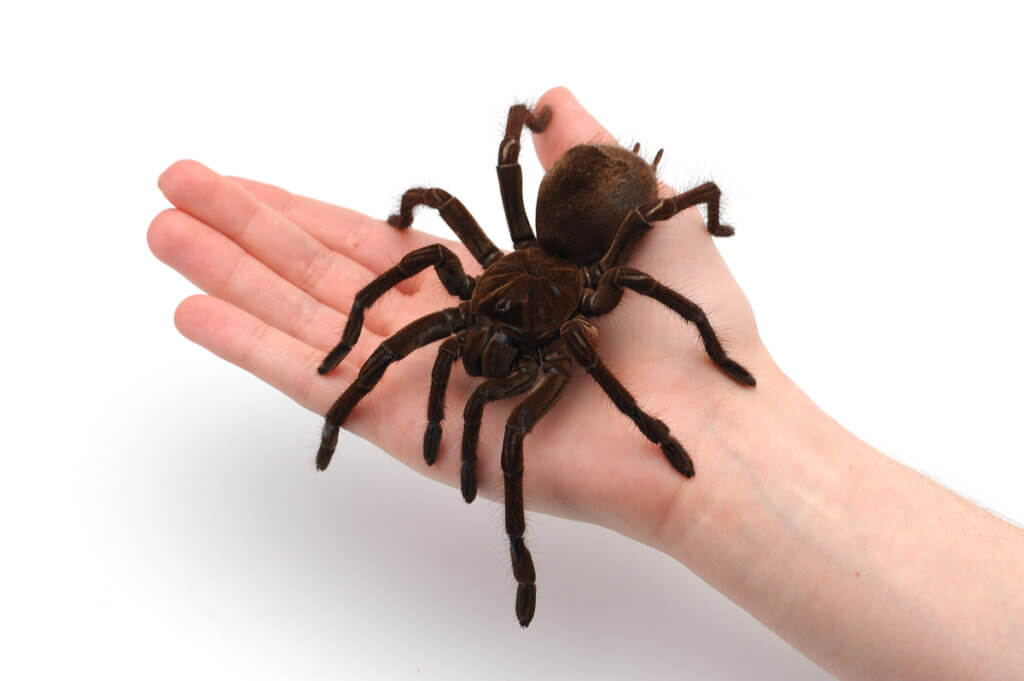 From a taxonomy standpoint, giant tarantulas belong to the Theraphosidae family. This term comes from the Greek word that means beast of light, although, curiously, they’re mostly nocturnal animals.

There’s no doubt that these huge arthropods have instilled true terror throughout human history. Nevertheless, many people decide to keep them as pets. As long as they’re careful with their stinging hairs, it’s not a crazy idea either. We invite you to discover more interesting facts about giant tarantulas!

The Theraphosa blondi, also known as the goliath tarantula or bird-eating tarantula, is the heaviest tarantula in the entire Theraphosidae family. It can easily reach 6 ounces and measure over 12 inches – if you include the legs.

Although many call it “bird-eating”, this nickname comes from an ancient 18th-century engraving where a spider of another species is devouring a hummingbird. In general, all tarantulas in the genus Theraphosa receive this nickname. However, in reality, they usually feed on other insects smaller than themselves.

Despite their fearsome appearance, giant tarantulas also have predators. In the case of the goliath tarantula, its largest predator is the coati. When a tarantula detects its presence, it begins to rub its front legs, which are full of urticating harpoon-shaped hairs.

If the predator gets too close, the goliath tarantula quickly opens its legs and fires these urticating hairs, which cause great irritation and make the predator flee.

Another interesting fact about these giant tarantulas is that they use these same hairs to cover their nests, which can contain between 50 and 150 eggs. Once born, the young will stay with their mother for two or three years, until they reach adulthood. These arthropods are very long-lived; females live up to 30 years and males up to 16.

Like its relative, the burgundy goliath bird eater, Theraphosa Stirmi, can reach a great size. There are records of specimens exceeding 30 centimeters (12 inches) in length in captivity.

However, this species is not as heavy as Theraphosa blondi, since it only reaches about 100 grams (4 oz) on average, although we know that a female once reached 5.3 ounces, also in captivity.

The threatening whistles of Theraphosa Stirmi

Theraphosa Stirmi is one of the giant tarantulas that also have the ability to fire their stinging darts in the face of their enemies. However, it also possesses another strategy to scare them off – or at least to try to do so.

When the Burgundy bird-eating tarantula feels under threat, before attacking, it emits a very high-pitched whistle to warn the predator that it’s been seen, and that it won’t hesitate to use its defensive weapons.

Unlike other spiders -such as jumping spiders or Salticidae- giant tarantulas are characterized by being blind animals. They can see different degrees of light and movement, but their ocelli are very primary vision structures.

To compensate for this lack of sight, these animals have a great sense of touch. This is thanks to their sensitive legs and special hairs on their legs and under their bodies. Through them, tarantulas know what kind of prey is nearby and the size of their prey. In fact, they can even tell if a dangerous individual is approaching.

Within the Theraphosidae family, to which giant tarantulas belong, there’s a genus called Hysterocrates. Within it, we find the Hysterocrates gigas species.

These tarantulas have the strange ability to swim and dive. Thanks to this quality, H. gigas can catch fish in the water that complement their varied diet of insects, different micro-mammals, and birds.

On the other hand, this group of spiders, although poisonous, aren’t problematic or deadly to humans – although a bite is really painful because of the size of the chelicerae. Besides that, they lack urticating hairs, but they’re much more aggressive than the rest of the tarantulas.

Many tarantula species live as pets in some homes. Before you decide to get one, it’s best to look into all its requirements, since it’s not exactly an easy arthropod to keep in captivity.

Finally, you must bear in mind that these animals are not to be petted or touched; they’re more of a collector’s item. If you don’t think you can take proper care of a tarantula, but you want an exotic pet, then it’s better to choose a different species.

Invertebrates
What Are the Differences Between Octopuses and Squid?