Is Scorpion Venom as Deadly as Most People Think?

Scorpion venom causes over 3,000 deaths a year and leads to more than one million serious incidents. Is their sting always as deadly? 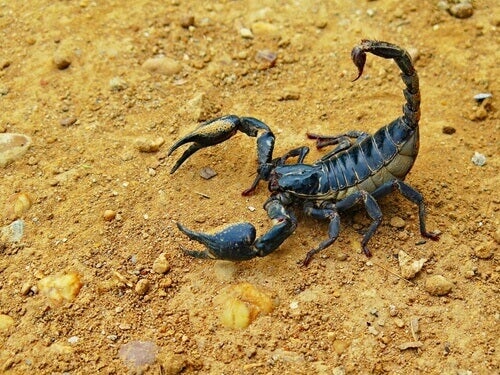 Scorpions are about 4 inches long and can quickly shift their tails in order to defend themselves from a perceived predator. Every species has different defense methods, so the effect of scorpion venom isn’t the same in every stung animal.

Scorpions tend to use two types of strikes: open and closed. An open strike is much faster and more precise because it covers more distance. Also, the stinger reaches and penetrates the body more deeply.

There are different types of scorpions and some of them are common in countries like Brazil and Argentina but also found in the arid regions of North Africa and the Middle East. Bats, snakes, reptiles, and mice are their natural predators.

This substance causes about 1.2 million serious health incidents each year. Furthermore, over 3,000 of them result in the deaths of children, older people, and those with compromised immune systems due to hypertension, heart disease, or diabetes. Such was the case of the scorpion in the province of Córdoba, Argentina, which claimed the lives of several children in 2017.

This scorpion venom causes inflammation in body organs and muscles. The inflammation damage ranges from localized injuries to multiorgan failures such as cardiac arrest and pulmonary edema.

Lung damage from a scorpion sting leads to their shrinkage and subsequent death from loss of breathing capacity.

The severity of a given case depends on where the scorpion stings (one on the foot isn’t the same as one on the neck), as well as how far the venom distributes throughout the body. In fact, the latter defines a mild wound or a systemic shock that involves the nervous and cardiovascular systems.

Symptoms and treatment of the sting

In order for treatment to be effective, you must understand the pathologic reactions that scorpion venom can cause.

Some of the symptoms after a sting are numbness, pain and burning sensation, redness, vomiting, muscle contractions, salivation, diarrhea, excitement, and generalized tremor accompanied by constant crying or moaning.

Researchers conducted studies with non-steroidal anti-inflammatory drugs such as ibuprofen, with good results in mice. This substance works because the overall effect of scorpion venom is inflammation.

These anti-inflammatories used in laboratory experiments made it possible to reverse the effects of the scorpion sting.

Professionals recommend applying ice to the affected area immediately after the bite. There’s a certain period between the sting and the death of the victim so if the symptoms correspond to those of a systematic condition, you must act quickly and seek the nearest medical help.

Having scorpion natural predators in your yard such as ducks, geese, and chickens is a natural way to keep them away from your home.

However, scorpions feed on cockroaches and spiders and will stay in places where there’s garbage, accumulation of debris, firewood, spaces with fallen wood, tiles, bricks, or cracks in walls, floors, and baseboards.

You can also find them in drains, rooms, and unventilated tanks, behind paintings, under furniture, or between clothes and shoes. It’s important to seal the points of entry and exit of any pipes you might have around your house; cover any openings with mosquito nets. Also, you must repair any cracks in the walls.

The scorpion is a nocturnal animal and remains underground during the day. This is why you mustn’t walk barefoot. Also, look at your clothes and shake them as well as your bedding before getting dressed or lying down. You must keep your place tidy and wear protective gear on your feet and hands when cleaning.

Are Scorpions Dangerous? Eight Things You Should Know
Commonly, when people write about scorpions they mainly focus on how dangerous they are. The bad reputation attributed to them is totally undeserved. Read more »
Link copied!
Interesting Articles
Invertebrates
Some Curiosities About the Octopus