The panda ant is a formidable opponent, armed with powerful jaws and magnificent armor. It also has a fearful bite and a good dose of agility and aggressiveness. 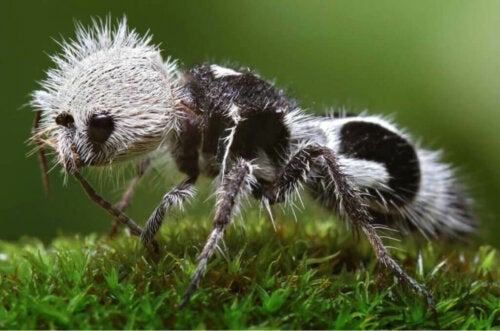 The panda ant (Euspinolia militaris) or velvet ant is a hymenopterous insect in the Mutillidae family. Despite its ant appearance, it’s actually a parasitoid wasp.

The Mutillidae family, encompassing more than 4,200 species, is characterized by a marked sexual dimorphism. In this family, only males tend to have wings.

Although the species was discovered about 80 years ago in Chile, there are relatively few studies concerning it. It’s known to live for about two years and prefers to colonize dry and sandy areas. Hence, specimens of the panda ant have been reported in Chile, Argentina, parts of Mexico and Southwestern U.S.

Dressed to invade: adaptations to be a warrior

The panda ant has several adaptations that allow it to exploit other aggressive insects and make them their hosts. First, its powerful exoskeleton is the first line of protection during the invasion of host nests of biting insects.

Moreover, nature ensures that only the strongest reproduce themselves, as the copulation is done during flight and only the largest males are selected.

On the other hand, the absence of wings in females, allows it to explore by land the future home of its eggs. This prolonged search exposes the female, but she’s ready. To accomplish its mission, the panda ant uses its remarkable defensive repertoire, which includes a powerful sting, warning squeaks, deterrent pigmentation, a trace of chemicals, and a variety of evasive tactics. We’ll tell you about them next.

The unmistakable appearance of the panda ant

The most eye-catching feature of the panda ant is its pigmentation, evocative of a panda bear. The insect is velvety white on the head except for the eyes, with black and white patches on the body.

This striking pigmentation is aposematic, serving as a warning for predators of their painful and powerful sting.

In both sexes, the antennae and legs are covered by short black spines. However, this species has a clear sexual dimorphism. Usually, its size reaches about 0.8 centimeters (2 inches), with males being significantly larger than females. Additionally, only males have wings, which are narrow and transparent.

On the other hand, adult females, which are terrestrial, resemble ants in terms of physique and behavior. Moreover, they’re equipped with a stinger and venomous glands, which give them a powerful sting.

The dreadful fame of the panda ant

In this species, non-flying females use their sting endowed with strong venom, to fend off enemies. Its sting is an adaptation that allows it to confront other aggressive species when invading their nests.

Sometimes, they sting humans and large grazing animals. In fact, experts know them by the common name of cow-killers due to their painful, but not deadly, sting.

The panda ant is a parasitoid

To address this point, it’s good to know the life cycle of the panda ant. During flight, males identify females and lift them up in the air to mate.

After mating, the female lays her eggs in each pupa of other insects’ nests, such as bees or wasps. When hatching, the larvae feed on their hosts. Each female can lay up to 2,000 eggs throughout its two-year life cycle.

Therefore, this species, like other parasitoids, produces a larva that feeds on the host larva. This dynamic shows a continuous and complicated struggle between resource producers and exploiters, which depend on the same resources for their survival.

Diet of the panda ant

Adult panda ants are solitary, meaning that they don’t form colonies of any kind. They feed mainly on nectar, but females occasionally take advantage of ants, caterpillars or pupae/larvae.

The stridulation: the sound of anguish

In general, this species of insects is silent. However, when disturbed, it emits peculiar, high-pitched, vibrant and chirping sounds, which are known as stridulation. This behavior adopted by a variety of arthropods, results from rubbing two rigid parts of the body. Moreover, both sexes stridulate.

It should be noted that the ecological function of stridulation in these insects is unclear. Even so, it has been suggested that these sounds could act as defensive warnings and/or mating signals.

In this sense, a 2019 scientific report showed that stridulation in this species differs from that of other genera from the same family. Thus, the emitted sounds include high-frequency spectral components in the ultrasonic range. The usefulness of these signals isn’t exactly known.

According to expert opinion, these sounds may be warning signs for their natural predators. No doubt, future studies will address the defensive effect of the panda ant’s stridulation against reptiles and rodents. If true, it would provide valuable information on its potential role in inter-species communication.

On one hand, velvet ants are fascinating due to their bright colors, sexual dimorphism, longevity, and often, their frantic level of activity. On the other hand, they occasion frustration because the evolutionary importance of these characteristics is difficult to prove.

Just How Dangerous Is the Bullet Ant?
The bullet ant stands out among the 950,000 species of known insects due to the pain caused by its sting. Discover more today. Read more »
Link copied!
Interesting Articles
Invertebrates
Discover How Worms Reproduce