There are wild species that can millions of eggs to preserve the continuity of their species in the face of constant danger, such as predators and intensive fishing; unfortunately, most born don’t survive before they reach adulthood 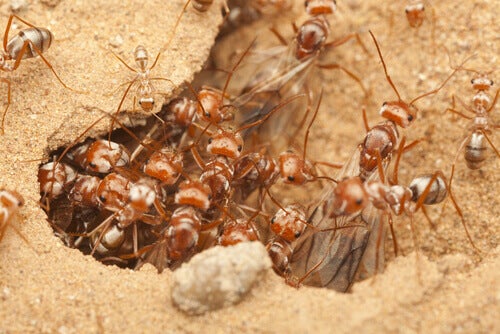 You’d probably think that rabbits have the largest litters, but they’re not the most fertile species in the world. Would you like to know about animals with large litters or spawnings? We’ll tell you all about it in this article.

We’ll list the most fertile animals of the animal kingdom. You’ll be surprised to discover how big the largest litters can be!

Like their relatives the bees, an ant queen  – from the first photo – can lay between three and four million eggs in a single month. She’s the only female in the colony that can reproduce, since the others are used to defend or build the nest.

The queen has a handful of males—who she birthed—that fertilize her. She is then in charge of deciding the sex of her babies, according to the specific needs of the nest. There are even some huge colonies with several queens and billions of eggs!

They’re large in size and circular-shaped, weighing more than 4,400 pounds, which makes the ocean sunfish one of the most fantastic creatures in the temperate and tropical seas. And especially as far as reproduction is concerned.

In each spawning season, females can lay no fewer than 300 million eggs! This is impressive, but unfortunately, most of them don’t survive.

Only an estimated two of these millions of eggs reach adulthood. This is due to several factors, such as ending up as food for predators or being caught by vessels fishing for other species, such as tuna.

And while we’re on the topic of tuna, they’re also quite fertile. Every year females can lay up to 10 million eggs. Another sea creature with a large spawning is the sturgeon fish, which lays 2.5 million eggs per year.

Continuing with the marine theme, one of the most impressive spawnings in the world is by the great coral barrier reef in Australia.

Each spring, they stain the water pink because of the amount of fertilized eggs. The process is as follows; the coral releases sperm and eggs to produce gametes outside their bodies. This happens only two days a year and, once the eggs are formed, the mortality rate is quite high. If we add climate change and navigation to that, it’s understandable why reefs are in clear decline.

Octopus mothers are among the most sacrificial in the animal kingdom and also the most fruitful. In a single spawning, they can lay between 50,000 and 200,000 eggs, which are cared for with much ‘love’ and dedication for 40 days.

In all that time, the female doesn’t move an inch from her babies, to protect them from hungry predators. This ‘monster of the depths’ also moves her tentacles to generate streams of water and to oxygenate them, which is essential to keep them alive.

Since the mother can’t leave them alone, she doesn’t hunt or eat, so she eats her tentacles to keep her energy up. In most cases, this is fatal to the parent. They can’t survive after hatching eggs and die.

They might not lay thousands of eggs like other animals, but this bird is worth mentioning because they’re the most fertile of its species. At just 11 inches tall, the monogamous grey partridge can lay up to 22 eggs per season, although the average is 18.

Nesting takes place between March and May and both the male and female incubate the eggs. Not long after they’ve hatched, the chicks follow their parents and get their own food, basically insects.

Breeds of Rabbit: Field and Domestic
Rabbits are becoming ever popular as a household pet, particularly because children love them so much. But what are the different breeds of rabbit? Read more »
Link copied!
Interesting Articles
Wild Animals
5 Animals that Live in Grasslands