The possession, breeding, or buying and selling of giant snails is forbidden in many countries. Keep this in mind before you get one. In this interesting article, learn all about the captive care of the giant African land snail. 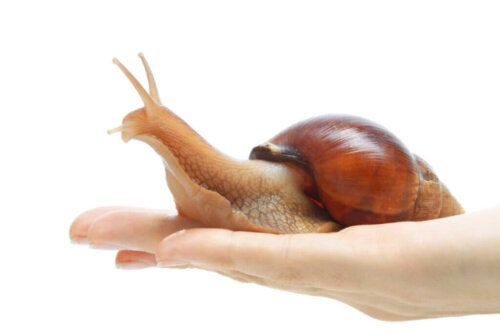 It can be exciting to keep a giant snail as a pet, simply because it’s exotic. However, before you consider getting one, you must consider the different species within this genus and the consequences of having them. Like any other land snail, the giant African land snail is difficult to keep in captivity in the long term.

However, this snail is easy to breed, which is something that experts advise against. If a person decides to keep this animal as a pet, they’ll have to be aware of the biological, ecological, and legal risks.

The Giant African land snail (Achatina fulica) belongs to the Achatinidae family, which includes the biggest land snails in the world. All the species are from Africa.

However, these animals have reached other parts of the world as food or fish bait. Its meat, like that of other snails, is highly appreciated in many countries.

Due to the trafficking of the species outside its countries of origin, its breeding for human consumption, and other uses, the giant African land snail is now considered an invasive exotic species in places like the United States, Argentina, Mexico, and Brazil.

Its voracious appetite, lack of natural predators, and ability to reproduce make this snail a very dangerous animal, both ecologically and economically. In addition to attacking local plant species, adult specimens destroy crops at lightning speed.

On the other hand, this snail is the main host of Angiostrongylus cantonensis, a parasitic nematode that causes eosinophilic meningoencephalitis in humans. Unfortunately, it’s also the host of many other parasitic species that affect other living things.

Due to all these threats, this animal is completely forbidden in places where they’re already an invasive species. Their possession is forbidden in regions where there are still no free populations, such as Spain.

The care of this animal is complicated. Right from the moment you get some specimens, you have to keep a close eye on them to make sure they don’t reproduce and that they aren’t infected with parasites.

These animals live an average of six years, but can live up to ten. So, you must be very sure of what you’re doing before buying any specimen. These invertebrates require constant temperature control and washing and often suffer from many bacterial diseases.

How should its terrarium be?

The shell of the giant African land snail can measure more than 10 inches in length. This big animal must be housed in a terrarium of no less than 20 liters.

In addition, these invertebrates need a soil substrate mixed with coconut coir (coconut fiber). On the other hand, you should place pieces of wood and cork inside it, as well as pieces of clay pots the snails can hide inside.

You don’t need to add more decorative details to it, such as live plants, as the snails will end up eating them. You have to completely disinfect all the materials that you place inside the terrarium.

The basic environmental conditions you must control every day are temperature and moisture. If you don’t, the animal will either die or go into hibernation.

Regarding the temperature, the terrarium should be at about 77°F. However, this animal is able to survive temperatures of between 66 and 78°F. Any temperature that falls outside this optimal range will negatively affect the snail.

On the other hand, moisture is crucial. You have to spray the substrate every day to keep it moist. However, make sure you don’t over-water it. Excess moisture favors the appearance of pathogens that can harm the animal.

Snails require this moisture to avoid dehydration and potential shell problems. If you use a heater to maintain the temperature (remember that it should always be outside the terrarium), you’ll have to spray it more often.

On the other hand, if the substrate is too moist, even though you don’t spray it every day, there may be a ventilation problem. Installing small fans or a mesh cover may help.

What to feed the giant African land snail

The giant African land snail is an omnivorous animal. Therefore, it’ll eat almost anything. Nevertheless, it’s best to feed adult specimens in captivity fresh fruits and vegetables. You can place them directly inside the terrarium, on the substrate.

It’s important not to leave more than two days’ food inside the terrarium, as it’ll rot. It’s best to add small amounts to prevent this from happening.

Finally, it’s a good idea to place a reptile water dispenser inside the installation. Although snails get all the water they need from food, it’s best for them not to depend exclusively on it. Lastly, it’s very important for you to place a calcium or mineral rock inside the terrarium. Snails require this mineral to keep their shells in good condition.

Two adult snails will automatically reproduce if they’re inside the same terrarium. Snails are hermaphrodite animals, which means they have both male and female reproductive organs.

A single giant African land snail can lay an average of 1,200 eggs per year. They’re big, yellow in color, and bury into the ground. When this happens, it’s best to dispose of them by freezing or drying.

Controlling the reproduction of these animals is extremely important. They wreak havoc on crops and nature when they escape or are released.

As you may have seen, it’s a bit difficult to recommend this genus of snails as pets. People should only consider getting giant African land snails in places where their importation is legal and, in addition, every owner must have some experience when it comes to exotic animals if they want to get hold of one.

Breeding Snails: What You Need To Know To Do It At Home
Breeding snails has become at profitable business. Learn everything you need to know about breeding snails at home in this article! Read more »
Link copied!
Interesting Articles
Invertebrates
Discover How Worms Reproduce