The Most Religious Animal in the World

OK, so it might not actually be religious, but you could be forgiven for thinking so with its praying posture. You'll be in for a shock though! 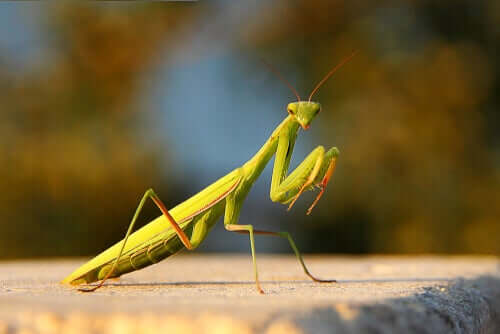 The praying mantis belongs to Mantodea order and feeds on other insects, like grasshoppers. Their name derives from the Greek word for “prophet” or “fortune teller” because they were believed to be the most religious animal in the world. This is where they get the name ‘praying mantis’, with their unusual posture, body erect and forelegs together as if praying.

When in this pose, they stay completely still except for the head, which moves in all directions to watch out for prey. Once their prey is within reach, they quickly grab it between their sturdy forelegs and eat it alive. Maybe now it doesn’t seem so religious anymore!

The praying mantis, the most religious animal

The praying mantis is the best known of the 2,450 species of mantis. Almost all mantises have the right color and shape to blend in with their environment. Many are green or brown, matching the living or dead leaves on surrounding plants. Camouflage is important for two reasons:

Mantises have two pairs of wings. The outer pair are usually narrow and leathery. They function as camouflage and as a shield for the hind wings, which are clearer and more delicate.

All mantises have large triangular heads that are narrow at the front and wide at the back where their large eyes are. They have thread-like antennae and are able to chew with their mouths. They measure between 3 and 7 inches tall.

The thorax is divided into three sections with flexible joints. This allows a wide range of movements, particularly for the head and forelimbs, which provides an advantage for stalking and hunting.

Their most striking feature is the structure of their front legs which are suitably adapted for capturing prey, with spikes for securely holding their food.

What does the ‘most religious animal’ feed on?

Mantises usually feed on invertebrates, mainly insects. However, some larger species will eat frogs, birds, and even lizards. Whatever the case, they eat their food alive.

They generally remain motionless, waiting for their prey to approach, or stalk it with slow, stealthy movements. On other occasions, they may chase their prey and they’re even able to catch insects in mid-flight.

And what eats mantises?

The mantis isn’t immune from danger despite being an excellent hunter. They have numerous predators including spiders, toads, lizards, snakes, birds, and bats.

When they feel threatened, they’ll stand up straight, spread their front legs, and open their wings. Their wingspan makes them appear larger and more dangerous. Some species even enhance this effect with bright colors and patterns on their hind wings. If they still feel threatened, they will attack their predator.

During reproduction, it’s certainly not religious

The female mantis is so voracious that the male needs to be careful not to become food. In some cases, males can take more than an hour to move 30 centimeters (12 inches) during courtship to reach the female. After crawling so slowly, he leaps up to grab her and mate.

He clings to the female’s thorax and wings with its front legs and then arches his abdomen to deposit the sperm in a special chamber near the tip of the female’s abdomen.

If the female is unhappy or has seen his arrival, she’ll eat him, starting with the head. Despite being decapitated, the male is still able to continue mating. This is because the mating action is regulated by a nervous center in the abdomen. This happens in all mantis species and is known as sexual cannibalism.

Many animal species can have a deceptive appearance, either for better or worse. In the case of the praying mantis, it looks like the most religious animal in the world, but it’s not exactly meek and mild. This is a major predator for insects and quite a macabre one at that.

But isn’t the beauty of nature in its surprises?

Keeping Insects as Pets: Ant Farms
While they might not be your first choice of pet, ant farms can be an excellent way to teach children about the responsibilities of being a pet owner. Read more »
Link copied!
Interesting Articles
Invertebrates
The Cricket: Is It a Pest or Good Luck?