What Are Annelids? Discover These Segmented Worms

What are annelids? This phylym includes segmented worms of various sizes, both marine or terrestrial. What's more, their bodies are covered with a thin skin, through which they breathe. 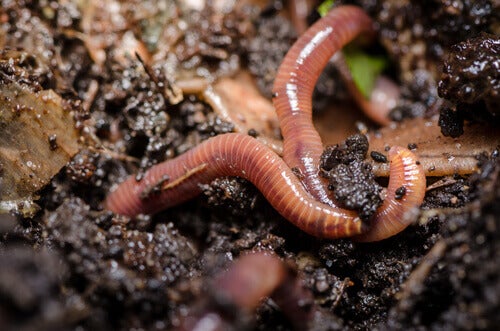 In this post, we’ll talk about one of the largest families in the animal kingdom – consisting of more than 16,000 species. What do all of these creatures have in common? They’re all segmented worms. Learn more about annelids below!

They’re a large group of vermiform invertebrate animals, whose body consists of rings that are similar to one other. Annelids can live in the sea as well as in fresh water and also in humid environments, and measure from one millimeter to ten feet.

They’re popularly known as ‘worms’. But they’re much more than that. There are even worm-like creatures that don’t belong to this family! We’re referring to caterpillars and centipedes, just to cite two examples.

But going back to annelids, it’s important to know that their body’s covered with very thin skin through which they breathe. What’s more, they can reproduce both sexually and asexually. In the first case, it can be with hermaphrodite specimens or not, and in the second case, through the excision or partition of their own body.

To understand a little better what annelids are like, take a look at the most famous or representative species of this great group:

Without a doubt, this is the best-known annelid. The earthworm – which appears in this article’s title photo- lives in underground tunnels that it digs into the ground itself. It needs to be in moist areas to be able to carry out its breathing, and is likely to surface at night to explore.

The worm is very beneficial for the soil, as it converts waste and soil particles into organic fertilizer. Although it has no teeth, it possesses a large tube-shaped mouth that allows it to eat with every step it takes. In a single day it can eat up to 90% of its weight!

Earthworms reproduce very easily. They’re hermaphrodites, but need to mate with another specimen in order to lay eggs. This is a situation that takes place approximately every two months. These worms can live up to five years.

Their scientific name is Hirudinea, and they’re also quite popular segmented worms. Leeches can live in the sea, on land, or in trees, although most choose fresh water. They have an exceptional longevity of 27 years and feed on worms, crustaceans, larvae, tadpoles… They’re voracious predators!


Some subspecies of leeches have three jaws and others none; their bodies are divided into two segments: head and trunk. The ventral sucker, the capacity to suck with its mouths, and its viscous exterior are its main characteristics. Like earthworms, they’re hermaphrodites.

Its scientific name for these segmented worms is Spirobranchus giganteus and they carry that curious nickname due to their shape – because they look like trees – and their colors. This annelid is introduced in living or dead corals, woods, and shells of tropical waters in the Atlantic and Pacific Oceans and in the Red, Caribbean, and Mediterranean Seas.


Like the rest of its family, the Christmas worm has two highly developed systems: the digestive and circulatory systems. In order to feed, it exposes its gill-fan and traps plankton and particles in suspension.

At the moment of reproduction, they release their sperm and eggs so that they can be fertilized. The larvae are embedded in the place they find suitable and there they develop as tube worms.

They’re parasites that take advantage of the echinoderms (they cling on with five hooks), which have a flattened and rounded shape, with edges covered with ‘hairs’ called cirrus.

Most mizostomids are hermaphrodites and their reproductive organs are rudimentary. They can be of various colors and always inhabit the same host throughout their lives, either clinging to a specific organ or area, or moving around their body.

Types of Respiration in Animals
Have you ever really thought about how different animals breathe? In this article, we'll look at different types of respiration in animals. Read more »
Link copied!
Interesting Articles
Invertebrates
What Are the Most Dangerous Stings?