What Are the Most Dangerous Stings?

The venom of these creatures can be life-threatening; some are not necessarily fatal, but they can be if the victim is allergic. 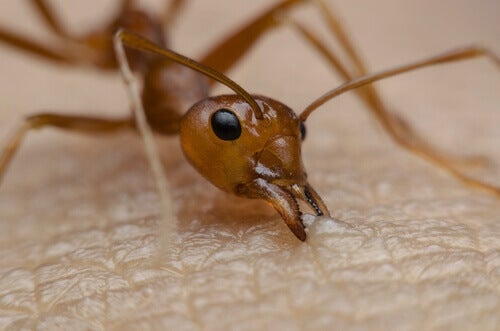 In the animal world there are a great variety of creatures whose main form of defense and hunting is their bite or sting, which introduces toxins into the bloodstream. The stings of these animals are, for the most part, very painful and in many cases, can also be dangerous to human health. But what are the most dangerous stings?

The most serious and dangerous stings

One of the most serious and painful stings is that of the red fire ant. This species can be found in Asia, Australia and America. In the United States, attempts to stop their spread have not been very successful, and the chances of encountering this species are very high.

Experts describe the pain produced by this sting as akin to electrocution. It’s sharp and sudden. The venom these ants inject consists of a natural alkaloid that generates painful necrotoxic activity.

In general, this venom isn’t fatal to humans, though it can be when the person is allergic. In these cases, there’s a risk of anaphylactic shock; if not treated in time the affected person can die.

The European honey bee, also known as the house bee, is the most widespread bee species in the world. It’s native to Africa, Europe and part of Asia, but was introduced to Oceania and the Americas.

Honey bee stings are quite common and, like those of the red fire ant, are life-threatening only if the victim is allergic. As for the pain, it’s been described as corrosive and hot – very painful but tolerable.

Velvet ants are also known as “cow-killer” ants because they have a sting so painful that it’s said to be enough to kill a cow. Only the females have a venomous stinger.

One of the aspects that stands out is not only the deep pain they can inflict, but also the length of time the effects last. These ants live mainly in New Mexico, California, Texas and Arizona.

The pepsis wasp has one of the most severe and painful stings in the animal kingdom; the level of pain has been described as like an electric whiplash. This species can reach up to 2 inches in length and hunts tarantulas to feed its larvae. With its stinger, the pepsis wasp captures, stings, and paralyzes its prey.

The pain caused by a pepsis wasp sting is very close to the limit of the Schmidt Pain Index. This index classifies hymenopteran stings according to the level of pain they cause.

This species is found mainly in Africa, Australia, Southeast Asia and throughout the Americas. The good news is that this wasp rarely stings unless threatened.

The bullet ant: the most painful bite

Many insects have extremely painful stings. However, the bullet ant tops this list, at least as far as hymenopterans are concerned.

It gets its name from the power of its bite, as those who have experienced it say the pain is similar to being shot.

The pain score of the bullet ant is 30 points higher than that of any bee and four points ahead of the pepsis wasp. Although the sting itself is very painful, the worst effect is the neurotoxic venom that causes a terrible burning sensation all around the affected area. This effect can last more than 24 hours.

The most dangerous stings

The sting of the leiurus quinquestriatus or deathstalker scorpion isn’t only painful, but also extremely dangerous for its victims, including humans.

This species lives in remote areas of Africa and has been responsible for the deaths of many people. Another dangerous scorpion species is the Androctonus or man-killer. The venom of these species attacks the nervous system relentlessly.

The Australian sea wasp, or cubozoa, is an extremely dangerous box jellyfish. They’re capable of sending out thousands of barbs containing a powerful venom that attacks nerve tissues as well as muscles.

They’re one of the most venomous animals in the world and are responsible for many deaths in Australia. Their venom can kill a person in just minutes.

How to Identify Insect Bites
When you spend time outside, you can get insect bites. In this article, we'll tell you about the different types of insect bites and how to treat them. Read more »
Link copied!
Interesting Articles
Invertebrates
Discover How Worms Reproduce