What to Do if You Come Across a Scorpion

The most important thing about this species is to find out if it's venomous or not, as its sting can be very dangerous to humans, even deadly. 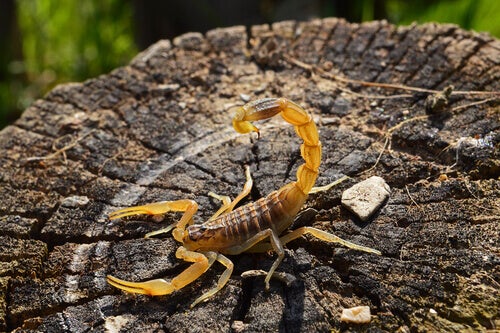 The scorpion is an arthropod directly related to the spider. It’s best known because of its tail that ends with a venomous stinger. If, by any chance, you should ever come across a scorpion, then you must know what to do. In this article, we’ll tell you more about it.

Identify if the scorpion is venomous or not

Of the 1,400 species of scorpions in the world, only a few produce venom that’s dangerous to humans. Of course, in any case, the sting is painful and causes a lot of itching, but it’s not always lethal.

Observing the scorpion is essential in determining whether it’s venomous. The pincers are key: the specimens that inject this harmful substance have long, thin pincers. Those that aren’t considered dangerous have wide and short pincers.

Another way to identify them, although more complicated, is by analyzing their stinger: if it’s poisonous it will have two, a short one and a long one.

Where do scorpions live?

In order to avoid a scorpion’s sting, taking precautions is essential. Even if it sounds strange, it’s more common to come across it in urban areas than in the countryside. This is due to the fact that it knows well where to hide or how to camouflage itself in the countryside.

Generally, they appear in dark, humid places, such as, for example, a closet, a drawer, inside a shoe or under a flowerpot. They prefer quiet, cool places, so we should also be careful if we leave our clothes on the floor for several days.

They can access houses and apartments through the kitchen or bathroom pipes. Therefore, it’s recommended to cover them properly. They can also enter underneath doors or through open windows. Placing objects that don’t allow them a clear passage is a good method to keep them away from our home.

What to do if we come across a scorpion

If we should spot a scorpion, then we should look for a way to catch it and take it to a specialized center, such as a laboratory of infectious or zoonotic diseases. Identifying the species can help in case someone has been stung or even to prevent this from happening in the future.

A good method to capture it is with a large glass bottle: cover it carefully and use some tweezers to handle it. Never pick it up with bare hands. You can use a piece of cardboard or some thick material to put it in the glass. Cover the glass and make a hole in it so that the animal can breathe.

If you’re too scared to try this, then take a picture or several pictures from different angles. Take them to a specialized center, where they’ll inform you if it’s a venomous species. Do your best not to kill it, especially if it has stung someone. The only way to know whether it’s dangerous is by asking an expert.

What to do if you’re stung by a scorpion?

Prevention, or any measures you’ve taken, may not have been effective enough, or you may not have had time to cover up the openings in your house. You may have even been a little distracted when the scorpion stung you.

It’s likely that you’ll immediately feel pain and mild swelling around the area of the sting. Call the emergency service as soon as possible and then call the poison control center. They’ll tell you how to treat the sting and how to determine if you’ve been poisoned.

Describe to the staff all your symptoms and personal characteristics, or those of the person who has been stung, as the approach is different depending on whether the scorpion has stung a child or an adult.

You should also give a very detailed description of the animal. While waiting for the medical staff to arrive, pay close attention to the symptoms you’re experiencing. In more severe cases, a person may vomit, cough up saliva, have tachycardia or involuntary limb movements, or suffer severe swelling in the area of the sting.

Wash the area thoroughly with water and neutral soap; keep it still and below heart level, so that, in case of there being venom, it won’t be able to spread easily in the bloodstream. Apply ice to reduce swelling and itching, and also to slow down the action of the venom. If it hurts too much, it’s OK to take a painkiller.

Are Scorpions Dangerous? Eight Things You Should Know
Commonly, when people write about scorpions they mainly focus on how dangerous they are. The bad reputation attributed to them is totally undeserved. Read more »
Link copied!
Interesting Articles
Invertebrates
Discover How Worms Reproduce