Plantigrade animals are those that walk while supporting themselves on the full sole of their feet, something unusual in the animal kingdom. Human beings are one such species. Among the others we find some that can walk on both hind legs like people. 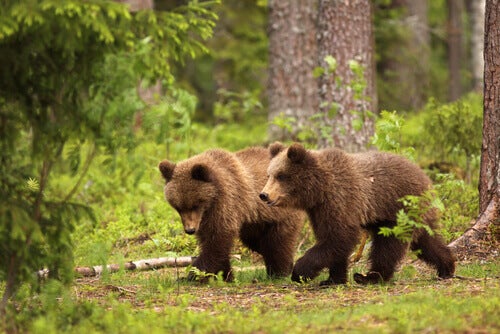 Plantigrade animals are those that walk by supporting themselves on the full sole of their feet, like human beings. Believe it or not, we’re talking about a relatively small number of species, since most animals are digitigrade, meaning they support themselves only on their toes to walk. See some examples in this article.

What are plantigrade animals?

Within this select group, which includes people, we can find bears, coatis, badgers, and primates. All of them walk with all four legs completely supported on the ground and some of them can stand on just their two hind legs. These examples stand out among plantigrade animals:

The whole Ursidae family—like the bear in the photo at the top of the page—are plantigrade. This means they move with a ‘heavy’ gait supported by the full sole of their feet. Although they walk on four legs, sometimes—for example when they want to look more threatening or to reach fruit from higher branches—they stand on their hind legs. They’re also able to walk upright for short distances.

In most cases, bears are large animals (they can weigh up to 1600 pounds and stand ten feet tall), and their ears and eyes are small compared to the rest of their body. Almost all are omnivorous, with the exception of the polar bear, and they live in forests and wooded areas.

The coati—or Nasua to give it its scientific name—is a small mammal with a long tail and snout. Native to the Americas, this animal prefers warm and temperate ecosystems with dense forests. They live in groups of up to 20 individuals and are very agile as they move among the trees; they support themselves on the full sole of their feet to move around on land.

Their short limbs end in strong nails which they use to dig for water in the ground; in addition, their pointed snouts are of great use when looking for food. Their coats can be brown, reddish or black, and they have striped tails and black faces.

Also known as ‘trash pandas‘ these animals make up another genus of the plantigrade group. Their limbs have five long, agile fingers that they use to orient themselves and to recognize danger. Interestingly, sometimes they sit on their hindquarters like bears, such as while eating or when they need to rest.

Raccoons live near rivers and in wooded areas, and they’re very skilled with their front legs, both when hunting and holding food. They’ll eat frogs, fruit, garbage… whatever they can find. Also, they’re nocturnal and they’re known for their gray coats, striped tail, and black and white snouts.

Also called the ‘glutton’, these are another of our plantigrade animals; they’re similar to bears but smaller and much more ferocious than they appear. Wolverines live in the forests of Canada, Alaska, Russia and Siberia, and there are no subspecies.

They’re solitary creatures and they stay on the move both during the day and at night, except during their reproduction and breeding season. The gestation period in the females is quite long. As for their diet, they mainly feed on rodents, insects, larvae, berries, seeds, birds, and eggs.

These are medium-sized mammals that live in Europe, America and Asia. The best-known is the European badger which has short, strong, highly-developed legs; this allows them to walk supported on the full sole of their foot without any problem.

In addition, badgers are characterized by their long snouts which they use to dig down into the ground. Their coats are dark gray and their faces have black and white stripes. They’re also omnivorous, nocturnal, and live in territorial clans.