The ease with which this animal reproduces (favored by hunting, among other reasons) has led this wild mammal to be increasingly present in cities. Although they tend to associate people as friends who will provide them with food, it is possible that in certain contexts they may see humans as a threat. 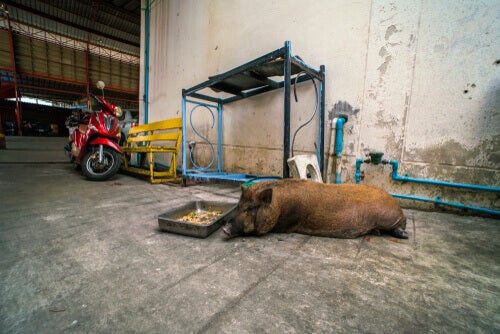 The urban wild boar is starting to be a problem in several European cities. The best example of this is probably Barcelona, in Spain. These wild pigs are beginning to become more humanized and feed on our waste. Meanwhile, their behavior is undergoing major changes that endanger our coexistence.

The wild boar (Sus scrofa) is a highly adaptable omnivore with a high reproductive rate. In recent years, it has seen an upturn in its population. As a result, this has led it to invade urban areas in various cities such as Barcelona.

It’s also one of the most successful animals in our ecosystems. Although hunting is abundant and permitted, the truth is that they’re growing. Some people blame the hunters themselves.

The use of feedlots, together with hunting carried out without scientific criteria has even caused their population to increase. The hunting is done more often than not with the only purpose of obtaining trophies.

These animals enter the city exclusively for the search of food. Wild boars scavenge in the garbage or even take advantage of stray cat feeders to feed themselves. In addition, they also sometimes receive food from neighbors who are unaware of the dangers of this practice.

This extra food supplement allows the animals to greatly increase their reproductive rate. This translates into larger litters of urban wild boar. They learn during their childhood that human food is rich and easy to obtain, and they grow up accustomed to seeing cars and people, which makes them less fearful of them.

Is the urban wild boar dangerous?

The truth is that although these animals are confident and don’t need to attack, there’s always the risk that they may choose to charge when faced with a possible threat, especially when a mother is accompanied by her young.

The great strength of these animals, together with their powerful tusks, means that a wild boar attack can be fatal for dogs, cats, or even people. That is why it’s advisable to stay away from these animals and never become too confident with them.

Another big problem they can cause is car accidents, as they constantly cross roads and this is dangerous for both animals and people. Moreover, the increase in contagious diseases among livestock, wildlife, and people is also of concern to the authorities.

In general, the wild boar has no intention of attacking us and sees us as a friend who can provide food. However, it’s also true that animals and people often communicate poorly, and the urban wild boar can take us as a threat in various contexts, which endangers our own safety.

Possible solutions to the boar problem

In order to control this problem, people are opting to eliminate the food sources that attract the wild boar. This can be done by securing waste containers and raising awareness among the population so that they stop feeding the urban wild boar. These are just some simple ways to reduce the problem.

For those who want to help stray cats, the authorities recommend contacting animal shelters. If someone wants to feed these animals, they should bring small amounts of food and remove the leftovers to avoid attracting the urban wild boar to the cat shelters. The boars can also be dangerous for them.

Unfortunately, other solutions include shooting these animals at the hands of hunters and officials, so educational avenues may save the lives of many wild boars. Other ways to control this may include relocating the animals, the use of repellents, or castration.

What’s certain is that, regardless of our ideas, it seems reasonable that we have to learn to live with this animal, and that we should reduce the reasons why the wild boar decides to leave the forests and enter urban areas. This is something that endangers our relationship with nature once again, and it’s because of our choices and actions.