Argali sheep, or mountain sheep, is a mammalian species that belongs to the group of rams or wild sheep. They inhabit Asian lands and are large in size. This mouflon is in danger of extinction. 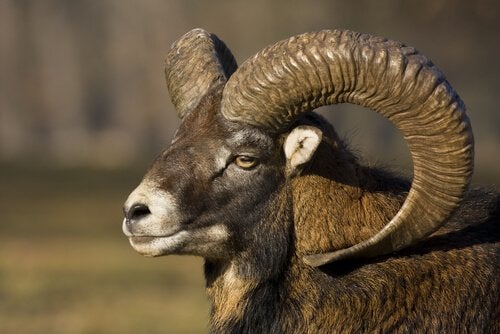 Within the family of the mouflons, there are the Argali sheep. They’re also known by their scientific name Ovis Ammon, and inhabit areas of the Tibet, the Himalayas and some other Asian mountain ranges. In this article, we’ll tell you more about this wild sheep that inhabits the mountains.

The word argali refers to any wild sheep in the Mongolian language. But if you refer to the Ovis genus, then we’re talking about the biggest non-domesticated sheep in the world –even more so than the bighorn sheep that inhabits North America.

The Argali is a large animal that grows to between 33 and 53 inches high and up to 7 feet long. Furthermore, rams (males) weigh around 220 pounds. Another difference between genders is that the rams have longer horns than the ewes (females), which they use to compete with each other during their mating season.

Rams have two large corkscrew-shaped horns that measure about 6 feet. The females also have horns, although these are a lot smaller, about 20 inches long.

The coloration of Argali sheep varies depending on the animal. Their wool ranges from light yellow to reddish brown to gray, and even black.

So far, nine subspecies of Ovis ammon have been properly identified according to their location (northern China, Tibet, Gobi Desert, etc). However, the most famous one is the Marco Polo sheep. Why is it called that? Because it was this Venetian merchant and traveler who first described them.

The scientific name for the Marco Polo sheep is Ovis ammon polii and they inhabit the mountains of Pamir mainly. This kind of sheep can be found in China, Tajikistan, and Kyrgyzstan, although some specimens also populate parts of Afghanistan.

These sheep prefer steep areas between 12,000 and 16,000 feet above sea level. During the summer they migrate to areas with denser vegetation near riverbanks, but in winter they relocate to the mountainsides that point towards the south.

Marco Polo sheep are known for their long spiral horns, which can measure up to 4.6 feet –the longest horns of the entire sheep genus in the world. The horns begin to grow shortly after these animals are born and they never lose them throughout their life. (Unless it’s by accident or by human hunting.)

As for their coloration, Marco Polo’s sheep is dark brown with white internal parts. As the temperatures drop, the belly hair lengthens and becomes a kind of “skirt.” They also have a long tail that protects them from extremely cold temperatures.

This species’ behavior is similar to that of any other member of the Ovis family. They live in small herds, and during the summer they divide by gender. They also separate into larger groups in order to conserve energy in the winter, cozying up to each other, and protecting themselves from predators.

Breeding of the argali sheep


Dominant rams select a “harem” of ewes for each breeding season after fighting each other for it. In addition to using their horns for the confrontation, they also rise on their hind legs and make themselves taller to intimidate their opponents.

After copulation, the rams separate from their “concubines” who are solely responsible for their offspring. The ewes give birth to one or two lambs after approximately 180 days of gestation.

The Argali sheep, in general, are an endangered species due to the loss of their habitat. This is mainly due to the overgrazing of domestic sheep and hunting. Although it can also be due to diseases transmitted from domestic herds.

In addition to this, hunters seek them to obtain their meat and horns. These are not only valuable in traditional Chinese medicine but are also first class trophies for sheep hunters.

The natural predators of the wild mountain sheep are the snow leopard and the gray wolf. Experts consider them to be in potential danger of extinction. Let’s hope that attempts to prevent their extinction have good results.

Animal Cloning: Advantages and Disadvantages
Animal cloning, also known as transgenesis, is a very controversial topic, but there are some medical benefits from this technique too. Read more »
Link copied!
Interesting Articles
Mammals
Crab-Eating Macaque: Characteristics, Behavior, and Habitat