Everything About The Bernese Mountain Dog

Find out more about the Bernese Mountain Dog - not to be confused with the St Bernard! 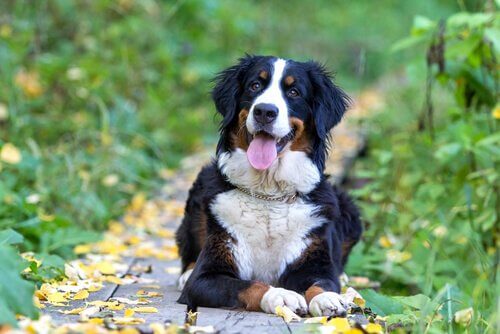 The Bernese Mountain Dog isn’t very well known. In fact, some people confuse it with the Saint Bernard, even though they’re obviously different physically. In any case, it’s a really interesting breed. Read on to find out more.

Origins of the Bernese mountain dog

This breed is known by many different names, such as the Boyero de Berna (Spanish) or the Bouvier Bernois (French). But obviously, as its name suggests, it originates from Bern, Switzerland.

Its original role was as a herding dog for large animals and as a guide dog on country estates. Sometimes it was used for pulling carts when owners traveled around selling milk.

Later on, once people realized how intelligent they were, they were trained to be rescue dogs. These days, they’re often kept as pets.

The Bernese Mountain Dog is a large, strong, and elegant dog.

Males can be between 25 and 27 inches tall and females between 23 and 26 inches tall. They have a long body and medium-size legs. It has a strong muscular neck and its straight back is capable of bending at an angle of 90°.

The peculiar thing about the Bernese Mountain Dog is that its fur only comes in one pattern. Their belly and lower legs are always white, and they’re black everywhere else, with a few areas of light brown.

Its fur is long but not necessarily smooth. To look after it and keep it shiny, you need to brush it at least once a day.

Their eyes are dark brown and are neither bulging nor sunken, although some can have drooping eyelids. Light surgery can resolve this.

Despite its strength and size, the Bernese Mountain Dog is the perfect breed for children. They have the perfect instinct to be a guard dog too. They’re friendly and gentle with most people, although they can sometimes be distrusting with strangers.

They’re independent dogs but this makes them no less affectionate.

Most Bernese mountain dogs tend to suffer from hip dysplasia once they get older. To prevent this as much as possible, it’s important to establish an exercise routine from a very young age.

They’re very active dogs and need to move. To do this they need space. If they can’t get out every day for some reason, they’ll need a garden or a large patio so that they don’t feel imprisoned.

As much as you might like one, if you live in a small apartment we recommend you look at a different breed of dog.

Before you buy a Bernese mountain dog

As with all pedigree dogs, it’ll be difficult to find one to adopt, although it’s always worth making an initial search.

However, if you’ve decided that you really want a Bernese Mountain Dog, be careful if you’re looking online and bear the following tips in mind:

If you’ve already decided that you want a Bernese Mountain Dog, you’ll be lucky enough to have a truly loyal and affectionate friend!

The St. Bernard: A Natural Protector
That big white dog with orange patches with a barrel tied around its neck is the St. Bernard. Do you remember the movie Beethoven? Read more »
Link copied!
Interesting Articles
Dogs
The Bergamasco Shepherd Dog Breed of the Italian Alps