The Java rhinoceros is one of the most endangered mammals on the planet. There are only about 18 living adult specimens left. 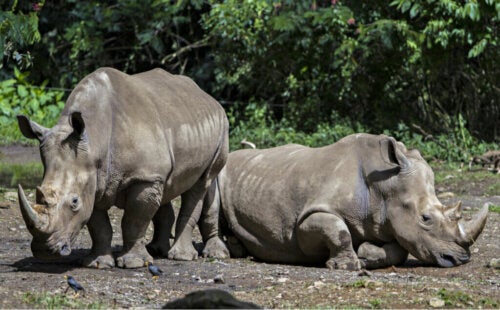 During the 19th century, the numbers of Javan rhinoceros were quite high, and it inhabited a vast region of the Asian continent. These animals populated countries such as Bangladesh, Myanmar, Thailand, the Lao People’s Democratic Republic, Cambodia, or Vietnam.

Currently, there are only a few in a small region north of the Island of Java, in the Ujung Kulon National Park. These animals are on the verge of extinction due to the loss of their habitat. Also, because people kill them to steal their horns, commonly used in traditional Chinese medicine.

Characteristics of the Javan rhinoceros

Anselme G. Desmarest described the Javan rhinoceros (Rhinoceros sondaicus sondaicus) in 1822. It was the last one to be described and cataloged within the phylogeny, due to its rarity and way of life.

As you can see, this species is one of the most endangered on the planet. There are some specimens in a national park but the local organizations fear they won’t survive for too long due to poaching and inbreeding. The other two subspecies of Javan rhinoceros are already extinct (Rhinoceros sondaicus annamiticus and Rhinoceros sondaicus inermis).

Males and females are quite similar; females tend to be a bit larger. Their skin has a gray-brownish tone. The easiest way to tell their gender is to look at their horn, which is either absent or tiny in females.

This is the second-largest mammal in Asia — the Asian elephant is the largest. It can reach a height of 5-6 feet and is about 14 feet long. They vary in weight and it ranges from nearly 2000 pounds to a bit more than two tons.

Up until the moment someone cataloged this animal as a species we only what local natives told us about the Javan rhinoceros. They spoke of a sort of prehistoric being with a horn. This animal lived in the most remote jungles of the Indonesian archipelago and was very difficult to find. Only their piles of excrement and enormous footprints gave away their presence.

Today, the Javan rhino lives in lowland rainforest areas, always near bodies of water. However, they used to live in open grassland and high mountainous areas. Research suggests they didn’t exactly inhabit the jungle, so their current habitat isn’t optimal.

What does the Javan rhinoceros eat?

The Javan rhinoceros is a herbivorous animal that mainly eats plants. They need a large amount daily to maintain their robust body. In addition, they need large amounts of water and this is why they stay around rivers and lakes.

They’ll eat overly fibrous food if they have to, but prefer tender sprouts. We know this animal can knock down woody plants in order to reach the green sprouts of the branches just like other Asian rhino species. In addition, they use their prehensile lip to select the most appetizing bites.

Reproductive life of the Javan rhinoceros

How rhinos reproduce and the development of their offspring is still a mystery, just like almost everything else about the biology of the Javan rhinoceros. We know it’s a solitary species and individuals only come together either to mate or to take care of their offspring.

Studies estimate the longevity of the species is between 30 and 40 years. Gestation lasts approximately 16 months and their sexual maturity begins between the ages of five and seven years for females and 10 years for males.

The conservation of this species has few expectations of a resurgence or reintroduction. The constant loss of habitat in this region of the planet is brutal. Thus, we won’t be able to learn more about these animals before their extinction.

The Rhinoceros: Characteristics, Behavior and Habitat
Rhinos feature in most people's childhoods, but they're probably not a species you know much about. Why don't we take a closer look at the rhinoceros today! Read more »
Link copied!
Interesting Articles
Mammals
European Mink: Critically Endangered