Why the Hippopotamus is a Dangerous Animal

Despite being an herbivore with a seemingly peaceful appearance, the hippopotamus is a dangerous animal. In fact, it's even more dangerous than a lion or a crocodile. Thanks to its territorial instinct, it considers species as a threat. 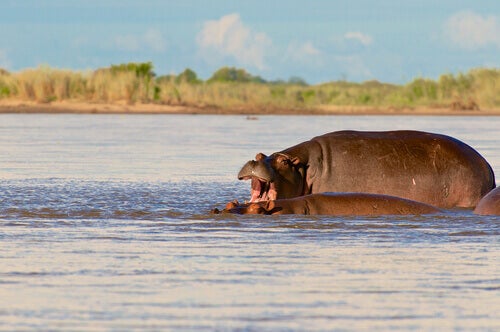 At first sight, the large, “overweight” appearance of this animal may give you the impression that it’s incapable of attacking anything. And when we discover that it consumes a vegetable and leaf-based diet and spends most of the day in the water, it sounds even more inoffensive. However, did you know that, actually, the hippopotamus is a dangerous animal? Today we’ll tell you why.

The hippopotamus is a dangerous animal–even more than a lion!

The hippopotamus even “beats” the crocodile, which is considered to be an agile swimmer and skilled at camouflage.  The crocodile is capable of hunting animals that are much larger than itself by hiding completely underwater, except for its eyes.

The hippopotamus may seem sweet–even endearing–given its robust physiognomy, large nostrils, and tiny eyes. However, experts agree that it’s the most aggressive animal on the planet. What’s more, it’s not afraid to come up against other animals that share the same waters, including crocodiles and caimans.

In reality, the hippopotamus is no fan of having to share its territory. That’s why it tries to occupy as much vital space in the water and the area of the shore where it has chosen to be with its family. By no means is this gigantic animal a friendly neighbor–rather, it’s quite a problematic one.

However, the situation changes when hippos are on land. Once out of the water, their irritability and combative spirit decrease…as long as there’s food available. But, if they can’t find food and fresh water, they’ll release their aggression.

While males are more savage when it comes to their territory, females become truly powerful when caring for their young. They’re not afraid to go up against a lion, hyena, or any other predator that wants to attack their calves.

Attacks by hippos on humans

Up until now, we’ve talked about the hostility of hippos in their natural environment toward possible predators, or to obtain food and shelter. But, what about the relationship between these enormous mammals and human beings.

There are accounts of episodes where hippopotamus have overturned boats and killed people swimming in Africa’s waters. Basically, this is because hippos consider any other living creature a threat to their peace and their environment.

That territorial instinct is what produces a reaction that can be fatal in many cases. And, it’s even more interesting to know that hippos don’t attack humans or any other animals because they want to eat them… After all, the hippopotamus is an herbivore!

When food or water are scarce, hippos will consider humans and other animals as competition. In other words, they think we’ll take their share of fruits, leaves, and plants.

When they attack, they use their strength and tremendous weight–between 7000 and 9250 pounds, depending on their age and sex. What’s more, they have an extremely powerful weapon: their fangs measure over a foot and a half long. And they can use these fangs to crush branches and whatever else gets in their way.

While hippos aren’t the most athletic animals on the savanna, they can run up to 28 miles per hour. And, when they’re in a blind rage, there’s nothing that’ll stop them.

This aggressive and territorial behavior is ultimately what allows this species to remain alive. Hippos actually have very few natural predators they need to worry about. That’s because no feline, no matter how hungry or desperate, would dare mess with such a furious half-ton hulk.

But, despite knowing that the hippopotamus is a truly dangerous animal, doesn’t it still seem tender and friendly? Don’t let yourself be fooled if you ever find yourself on an African safari! You might just witness its true nature.

The Rhinoceros: Characteristics, Behavior and Habitat
Rhinos feature in most people's childhoods, but they're probably not a species you know much about. Why don't we take a closer look at the rhinoceros today! Read more »
Link copied!
Interesting Articles
Mammals
What Is an Animal Generation?

Mammals
Discover the Little Known Aristocrats of the Animal Kingdom

Many cultures recognize cats as the aristocrats of the animal kingdom. In addition to dominating many of the ecosystems they…

Mammals
Find Out All About Cunning Wild Canids

The canid family consists of carnivorous animals of all types, colors, and sizes. In general terms, all its members are…