The smallest primates stand out not only for their petite size, but also for the originality of the shapes and colors of their coats; some of them are around 8 inches tall. 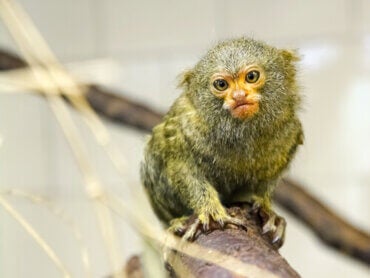 On the one hand, we have the great apes such as the gorilla and the orangutan and, at the same time, the smallest primates, which also belong to the same family. They’re not endowed with an impressive height, but they do have a lot of personality. Would you like to know more about them? Then keep reading this article.

What are the smallest primates?

Within the large primate family there are species of different sizes, weights, and habits. Although the chimpanzee, gorilla, and orangutan are the most well-known, others are extremely small and, at the same time, cute. Would you like to meet them?

The pygmy marmoset, which appears in this article’s main image, is the smallest primate species known to man. It lives in the forests and rain forests of central and northern South America, specifically in places near watercourses in the Amazon.

It’s no more than 7 inches tall and its tail isn’t prehensile, as with many of its relatives. The pygmy marmoset’s fur is thin but dense, and colors range from gray to brown or yellow to black.

It’s omnivorous (it feeds on fruits and insects from trees and sucks sap and gum from trunks) and lives in groups of up to eight individuals. The family’s led by a pair of adults, young, and infants. Finally, these animals tend to be most awake in the morning and before sunset.

Its scientific name is Callithrix jacchus, but everyone knows it as ‘marmoset’, and it’s another of the smallest primates in existence. It’s an endemic species of the Brazilian forest that measures between 7 and 10 inches long and a tail that can be longer than its body–up to 14 inches long. In addition, it has grayish-black fur and both the forehead and jaw are covered with white hairs.


This monkey forms groups of up to 20 individuals which are very territorial. Unlike other members of its family, it forms monogamous pairs. The female can procreate up to twice a year, with litters of up to three offspring.

The tamarin, or golden lion tamarin, is another of the smallest primate species in the world and lives in Brazil, specifically southwest of Rio de Janeiro. Most of the specimens are in a reserve and the rest – about 500 of them – are in captivity.


It’s the size of a squirrel, measuring between 13 and 16 inches, and its tail is the same size. It owes its name ‘lion’ to the mane that grows on the sides of its face, and ‘golden’ to the fact that its fur is of a very striking yellow and orange tone.

The tamarin feeds on fruits, frogs, flowers, lizards, insects, nectar, and mollusks. It’s monogamous, forming territorial groups of up to 14 individuals with a dominant pair and, even though the females take care of the young at birth, the males help in this task.

In the Tarsius family, all members are extremely small. In fact, the spectral tarsier is no longer than 14 inches with a very long prehensile tail. It’s nocturnal, lives in small groups of up to six individuals, and can be either monogamous or polygamous.


The spectral tarsier inhabits forests, mangroves, forest gardens, and any tropical location with lots of trees, as it rarely descends to the ground. It feeds on insects, rodents, and small reptiles and is the mammal with the largest eyes relative to its size.

The ‘macaque’ family is one of the largest among primates and, in the case of the Celebes crested macaque, it’s one of the smallest. This small primate lives in the jungles of Indonesia and is critically endangered.


It measures no more than 20 inches and is completely black. It has long fur like a ‘crest’ and a very long snout. As for its habits, it’s diurnal and feeds mainly on fruits.
The Primate Species: Our Closest Relatives
The primate species is an order of mammals in which humans are included. It's also a category with a wide variety of species and sizes Read more »
Link copied! Next
Interesting Articles
Mammals
What Are the Differences Between Jaguars and Leopards?