The European mink species is in danger of extinction due to a related invasive species: the American mink. 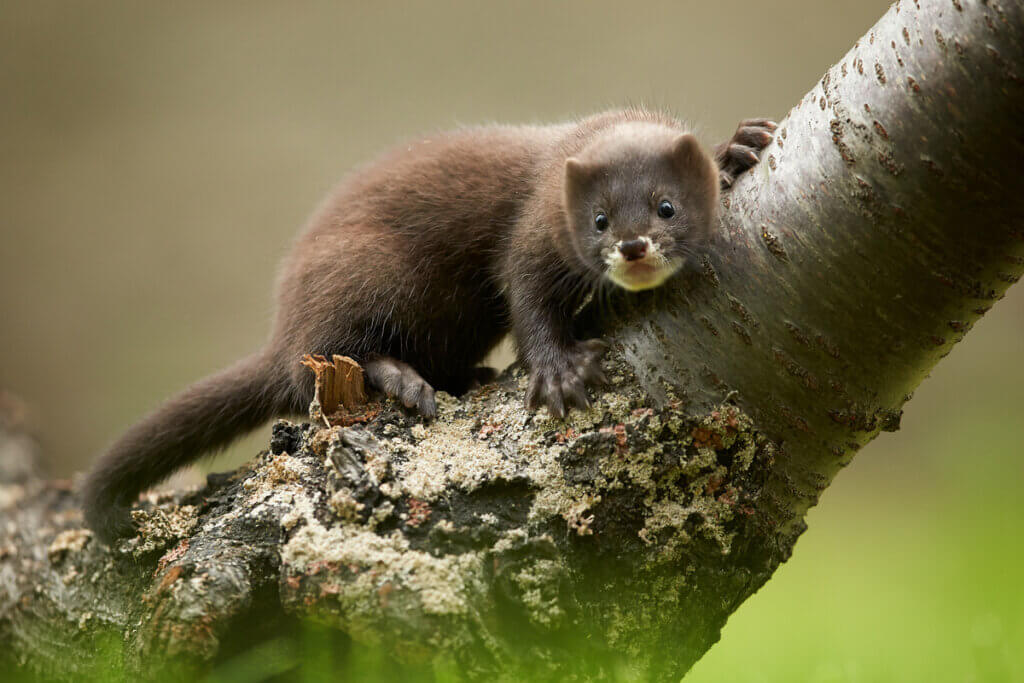 The European mink (Mustela lutreola) is a critically endangered species and one of the most at-risk small mammals in Europe.

Loss of habitat, uncontrolled hunting, and, most importantly, the invasion of the American mink, a dominant competitive species, are some of the contributing factors for their disappearance.

How to tell the difference

One of the biggest obstacles to conserving the European mink species is its competition with the American mink, a species brought to Europe by fur farmers about a century ago.

The two species are quite similar. Both are from the same family and have similar builds and behaviors. However, there are a few physical traits that can help us differentiate the two. The following are some of the contrasting characteristics:

In addition to these morphological distinctions, we can also spot some differences in their behavior. The American mink is more aggressive and is a less demanding species with respect to its habitat, as it can adapt easily to any type of aquatic environment. Additionally, the American mink has a greater reproductive capacity.

Causes behind the dwindling species

There are three main factors for the disappearance of the European mink, which we’ll discuss below. The most efficient way to ensure species conservation is to take action steps based on these points:

1. Competition with the American mink

The American mink is another small mustelid, but whose origins are in North America. Fur farmers began breeding the species in Canada and the United States at the end of the 19th century in order to sell their fur.

Commercial success was so popular that business was taken to Europe in 1920, where fur farmers built the first mink farms, which expanded quickly.

Years later, feral groups of American minks popped up throughout Europe as a result of escapes from poor security or accidents at the farms, being let go on purpose, and massive liberation campaigns by animal-rights groups.

The introduction of American minks had a very negative impact on the environment and indigenous animal species.

The American mink’s ability to adapt and high rates of reproduction made it a big competitor for other mustelids, especially for the European mink, who has to fight for the same territory and resources.

The European mink has disappeared from 90% of its original area of habitation in Europe. The populations that are still in the same area have become isolated from other groups.

The western (Franco-Spanish) population is cut off from the eastern (Danube Delta and Russia) and, in turn, the Spanish and French populations in the west are also isolated.

This genetic isolation has led to a huge loss of biodiversity, which has caused the European mink to become an even more fragile species. One of the main objectives of captive breeding is to combat this by introducing different specimens to increase genetic variability.

The European mink is a peculiar animal in that it thrives in specific environmental conditions. It typically prefers areas with a wide riverbank, dense vegetation cover, and good-quality water, with a slow or moderate current. However, river ecosystems are one of the most affected by human action.

Changing river beds and margins, diminishing riverside vegetation, the exploitation of aquifers, water pollution, and the construction of architectural barriers that modify natural river systems are the most common causes of the loss of these ecosystems.

Strategies for conservation of the European mink are designed to confront the above points. Currently, there are many different conservation programs across Europe that are working to save this species from extinction. Here are some of their key strategies:

Understanding the situation European minks face in the wild is fundamental in carrying out an assessment of the species. To do this, capturing, recapturing, and keeping track of different groups is essential for capturing hard data.

Similarly, it’s important to understand the population density of American minks in order to determine whether methods for managing the invasive species are working.

2. Reintroduction to the wild and breeding in captivity

The European Endangered Species Program (EPP) is a conservation program that is currently working to save the European mink species, as well as many other endangered species. The EPP spearheads reintroduction programs in countries such as Estonia, Germany, France, and Spain.

One of the biggest issues scientists have encountered when breeding this species in captivity is the male European mink’s behavior. Often times, when trying to pair males with females in heat, the male doesn’t show any interest in mating, runs away from the female, or, in some cases, can act out aggressively.

There are few studies that verify what factors make wild European minks act differently than those in captivity. However, based on experiences with animals from the same family (Martes martes) from other animal centers, we can see that learned behaviors, age, and competition with other males can greatly influence successful mating.

3. Preventing the spread of American minks and conserving habitats

In order to stop the spread of the invasive American mink species, it’s necessary to control the population and prohibit new American mink fur farms from opening, as conservationists consider them to be a huge risk to the European species.

In the same way, measures for protecting and restoring river ecosystems need to be implemented urgently. This would help renew connections between different European mink groups, which, in turn, would boost opportunities for genetic exchange. Furthermore, river conservation would be beneficial for other endangered species.