Lithoredo Abatanica: The Mollusk that Can Change the Course of Rivers

An American biological research team discovered a new species of mollusk - closely related to shipworms - that bores into the rocks on the bed of the Abatan River on the Philippine island of Bohol. But how does its intestinal mechanism actually work? How can it obtain nutrients from the rocks themselves? 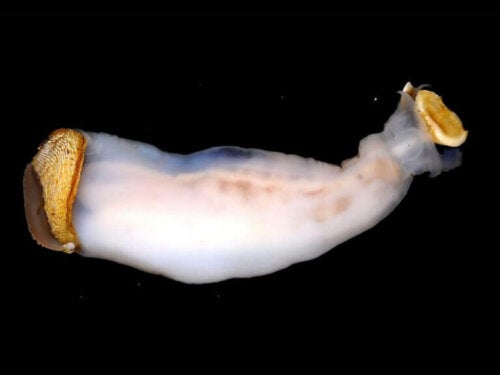 Lithoredo abatanica is a curious freshwater mollusk with a very special diet. Unique in the world, researchers have observed these animals consuming limestone rock, and excreting it as sandstone.

L. abatanica is considered to be a member of the shipworm family. Until now, experts have always described shipworms as “wood-feeding”.

Shipworms have been described in literature since the 4th century BC, and are known as the “scourge” of sailors. Even now, because of their habit of boring into wood, they can cause huge amounts of damage to boats and docks.

Unlike other shipworms, L. abatanica lives in fresh water. Their presence in limestone rock in the bed of the Abatan River in the Philippines has only been reported in the past few years.

The fact that it bores into limestone rather than wood allows us to distinguish this species of shipworm from its relatives. After ingesting the stone, which accumulates in the guts, they grind it up and later excrete it as fine-grained sand.

The traits of this “rock worm” are so unique that experts not only had to class it as a new species, but as a new genus within the teredinidae family.

Lithoredo abatanica‘s technique of boring into rock by ingesting it is a surprising mechanism, unique so far in the animal kingdom.

Despite their name, shipworms aren’t worms. They’re mollusks, a type of bivalve that belongs to the Teredinidae family, a group that also includes various types of clam. These creatures have a very small shell at one end of their long, worm-like body.

The shell of this mollusk doesn’t provide any protection for its elongated body. Instead, the tiny pair of shells has evolved so that they can use it as a tool, with which they can rasp away at the surface of the rock.

This digging tool has adapted for the task of boring into limestone, and consists of dozens of tiny teeth. They use these teeth to begin the process of crushing the pieces of limestone, ready for ingestion.

1. L. abatanica is related to another Teredinid, the Kuphus polythalamius. These large creatures, which measure around 60 inches in length, live in the mud. Researchers found them living at a depth of around 10 ft, off the coast of the Philippines.

2. K. polythalamia lives in a pretty unpleasant environment. The mud is rich in organic matter, and emits large amounts of hydrogen sulfide, a gas derived from sulfur.

The feeding technique of K. polythalamia consists of using good bacteria – endosymbionts – that live in its gills, to obtain nutrients. These bacteria oxidize sulfur and produce compounds that the worm can feed on.

What’s the point of eating limestone?

Researchers don’t believe these worms get their nutrition from the rock itself. Instead, experts speculate that these mollusks may obtain nutrients from a symbiotic relationship with some types of bacteria.

It may be that the unique bacteria that live in their gills or in the siphons through which they excrete the sandstone provide them with metabolic products, which the worm is then able to use.

Experts also point out that the rock particles in the gut may help them to grind up food such as krill, similar to the way a bird’s gizzard works.

The burrowing habit of L. abatanica may play an important role in shaping the river ecosystem, creating new habitats. In the case of shipworms, the maze of tunnels dug by these creatures is known to provide a refuge for fish and many marine invertebrates.

In this sense, the ecological impact of L. abatanica is consistent with that of other teredinids. There are two factors which confirm this:

Thus, the presence of L. abatanica increases habitat complexity for a number of different species, and likely alters the course of the Abatan River.

The secrets of nature

There are still many mysteries when it comes to the physiology of this new group of teredinids. Firstly, studying their ecological habits could tell us a lot about how other organisms in their environment depend on the tunnels they create.

Because these rocky burrows can remain preserved for millions of years, their importance could be huge. Understanding these modern engineers may also shed light on the evolution of the river ecosystem.

Finally, discovering whether L. abatanica is the host for special rock-digesting microbiotica could have many biotechnological applications. This knowledge could constitute a new source of products that promote economic development.

The Amazing Way Silkworms Work
Have you ever wondered how silk is made? Today, we'll tell you all about how silkworms work to produce this precious thread. Read more »
Link copied!
Interesting Articles
Invertebrates
Discover How Worms Reproduce