Caridean Shrimp: Where Can They Be Found?

Caridea are a group of thousands of species of decapods known as shrimp. Due to their abundance and global distribution, they're a very valuable resource for humans and nature. 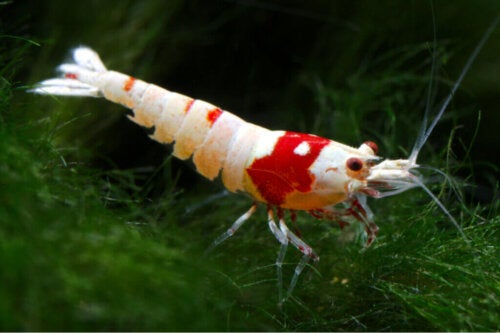 Caridea are a group of decapod crustaceans (Decapoda: Caridea) made up of several species. In fact, this taxonomic group is only surpassed in number by their crab relatives. Besides these, other close relatives are prawns and lobsters. Let’s take a closer look at caridean shrimp.

Commonly, caridea are known as the caridean shrimp. This prolific species inhabits the depths in almost every aquatic environment in the world.

In fact, there’s an immense diversity of shrimp that live in the sea, but also in brackish and fresh waters on coasts, estuaries, rivers, and lakes. If you want to know more about these invertebrates, keep reading!

Worldwide, around 3,500 species were recognized in 2011, but this number is continually growing. Approximately 770-800 species live in freshwater and inland waters, such as underground caverns, for example. Freshwater caridea makes up one-fifth of the world’s shrimp diversity.

As a result, we can affirm that caridea are widely distributed around the world from the equator to the polar regions. Regarding their habitat, they’re found in various ecological niches, from shallow or moderately deep coastal waters.

You can also find pelagic species, which live in the middle ocean waters around 650 feet deep, while others are considered benthic, inhabiting the seabed at greater than 16,5oo feet.

In this context, it’s difficult to estimate the true magnitude of the number of shrimp species, as new species continue to be found each year. Among the freshwater species, two genera are numerically dominant: Caridina and Macrobrachium. However, there might be many more species waiting to be discovered.

Interestingly, some species of caridea live in commensal relationships with sponges and other invertebrates. Commensalism, although it’s common with marine shrimp species, is rare in freshwater species. So far, experts know of two species that live this way:

The anatomy of shrimp and prawns is very similar, but not the same

Both creatures have bodies divided into three parts: cephalothorax, abdomen, and telson (a tail shaped like a small fan). This tail allows them to swim backward quickly. Like all decapods, they have 10 legs specialized for carrying out different functions, such as walking, feeding, or reproducing.

In addition, both have gill respiration and a chitin exoskeleton. While they might be colored, they are often semi-transparent, making them difficult to see in the water. They have three pairs of sensory antennae and strong maxillae in the cephalothorax.

The antennae are usually long and can actually exceed the length of the body.

Physical differences between shrimp and prawns

In prawns, branching tree-shaped gills and antennae, which can be double the size of the body, are present in marine waters and very few freshwater species.

They also have six pincers, one at the end of each of the first three pairs of legs. When looking at the exoskeleton, the first plate overlaps the second and the latter overlaps the third.

On the other hand, in shrimp, they have leaf-shaped gills. Their antennae are relatively small and don’t exceed the size of the body. While the third set of legs never ends in a pincer, they can have pincers on the first and second pairs or only on the second pair of legs.

The size of shrimp varies between the species. Some, such as the Emperor Shrimp, measure no more than a few millimeters, while others reach up to 8 inches in length.

What do caridean shrimp eat?

In general, many species of this infraorder are filter feeders. However, many others are omnivorous, meaning they consume plant and animal matter.

In fact, they can eat crustaceans, mollusks, ophiuroids, algae, necrotic tissue of other organisms, various parasites, and some other slowly moving benthic organisms.

It’s important for the ecological niches that caridean shrimp consumer carrion. Because they work consuming dead tissues or parasites of other species, people often call them cleaning shrimps.

It’s interesting to know that species of the Alpheidae family, known as pistol shrimp, stun their prey before eating it by making a loud noise with one of their claws, producing a click through the water.

Caridean shrimp are key for many species

It’s important to consider that, due to their small size and great abundance, caridean shrimp are natural prey for many predators around the world.

The numerous species are the basis of the diet of seabirds, fish, crabs, and many other marine species. Due to their dietary value for humans, their commercialization is also very important in the economy of many countries.

The state of conservation

Recently, the IUCN included a total of 13 species of freshwater shrimp in the Red Data Book.

The risk is higher for species that inhabit a single cave or cave system, as these systems are under threat of human invasion and groundwater contamination. So far, experts consider Syncaris pasadenae to be the only shrimp species that has become extinct.

Antarctic Krill: A Tiny Organism With an Enormous Job
Accustomed to living in subzero temperatures, antarctic krill makes up part of the diet of many cetaceans. Read to discover more. Read more »
Link copied!
Interesting Articles
Invertebrates
Characteristics of Four Types of Scorpions