The prehensile tailed porcupine has a very interesting bulb-shaped nose that has whiskers. It goes perfectly with its ball-shaped body covered with quills. 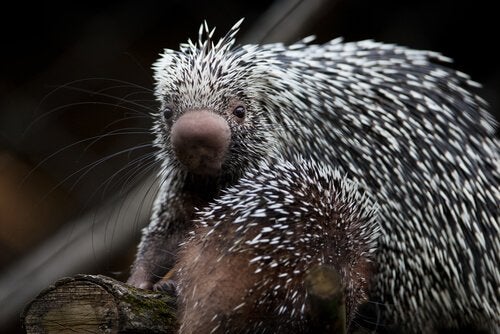 The prehensile tailed porcupine is one of the 12 species of porcupines that live in the New World. They are endemic to the South American forests of Venezuela, Guyana, Brazil, Bolivia, Paraguay and some areas in the very north of Argentina.

These animals are excellent climbers and spend most of their time in trees. Like many nocturnal animals, the prehensile tailed porcupine has poor eyesight, but very sharp senses of touch, hearing and smell.

Certain mammals and birds of prey may try to attack the prehensile tailed porcupine, but the predator doesn’t usually come off too well. This species defends itself very well by growling, approaching the predator and shaking its quills at them to intimidate them.

Adult individuals can reach about 23 inches in length and weigh up to 11 pounds. Their tail is almost as long as their body, and that adds between 12 and 18 inches more to their total body length. They use their prehensile tails for balance and grip when climbing, as well as for hanging.

This species of porcupine has short thick quills, which give it a mottled appearance. The quills are usually flat, but they rise up when the animal feels threatened. They also vary in color, from cream to yellow, to brown and almost black.

Its skin color is very similar to that of its quills, with a yellow-orange tone. This tonality is due to a waxy and prickly substance that comes from the sebaceous glands of the males and females. The semi-hollow spines are between 2 and 4 inches long and can effectively penetrate the flesh of predators, and they’re very difficult to get out.

Not much is known about this species’ reproductive system. In captivity, scientists have observed cases of males urinating on females and their young to mark them. They do this once during the mating period and once when the baby is born.

Females reach sexual maturity at around 19 months of age and can continue to reproduce until they’re 12 years old. The gestation period lasts approximately 203 days. Then, the baby usually weighs about 14 ounces, and is born with its eyes open and is able to climb.

Weaning occurs around 10 weeks of age, but the animal doesn’t reach its maximum size until about 48 weeks.

The prehensile tailed porcupine’s sexual organs are internal. Scientists used to have to wait six months before they could identify their gender. However, now they can extract a quill and use innovative DNA analysis to identify the sex of the animal.

This animal is an herbivore. They enjoy leaves, buds, flowers, roots and the cambium layer found under the bark of some trees. They usually eat alone or in pairs, but never in groups.

It’s nocturnal so it usually sleeps during the day and will then go and look for food when night falls. They move slowly but easily between the trees. Normally, they will only descend to the ground when they can’t jump a gap between the trees, and also to mate and defecate.

The prehensile tailed porcupine is socially tolerant, especially when mates and food are plentiful. However, they prefer small groups or totally solitary lifestyles. Tall branches and hollow trunks are their preferred spaces for nests and for sleeping.

This species communicates in different ways, including acoustic, chemical and visual means. Mainly, they use long moans, screams, grunts, whistles and squeaks for auditory communication. Also, they’ll grind their teeth, change their posture and rattle their quills if they’re faced with a possible threat.

The life expectancy of a prehensile tailed porcupine in captivity ranges between 12 and 17 years. This species is not listed as threatened or in danger of possible extinction. However, they’re frequently displaced as a result of a loss of habitat, and, in some regions, are killed by hunters.

Hedgehog Facts: habitat, traits and behavior
This small mammal, who is becoming increasingly popular as a pet, has a life expectancy of eight years. Despite its sympathetic appearance, it's a territorial creature that will defend himself with his quills if he feels threatened. So, it's important to get him used to humans from a young age Read more »
Link copied!
Interesting Articles
Mammals
Crab-Eating Macaque: Characteristics, Behavior, and Habitat