Meet the Platypus, An Extraordinary Animal!

Today we'd like you to meet the platypus. These animals are living evidence of the proverbial "exception that proves the rule" in mammals. This is because they lay eggs, swims, and even sting. Its striking hybrid aesthetic is something between a duck and a beaver. 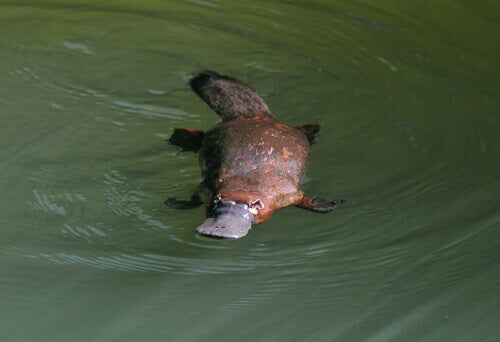 Meet the platypus, a rather interesting creature that has a beak similar to a duck’s, a tail similar to a beaver’s, and legs that resemble an otter’s. Also, it’s venomous, swims, and lays eggs. Far out! Today’s article is about this species that’s endemic to Oceania.

This semi-aquatic mammal is native to the island of Tasmania and eastern Australia. Its appearance is quite curious due to its flat snout, long tail, and legs that allow it to swim, as we mentioned above.

This is, without a doubt, a really strange case in nature’s “portfolio”! Ornithorhynchus anatinus (its scientific name) are mammals that lay eggs and then breastfeed their young. Also, the males have a spur on their hind legs with which they sting and release venom. These are certainly extremely unusual features in mammals!

The body of the platypus is dark brown with lighter areas on the belly. The animal is covered with thick fur that insulates them from the cold and the water, and also keeps their internal organs warm.

Males are slightly larger than females and can weigh over five pounds. Furthermore, their body temperature is around 90°F, another curious fact for a mammal as most of us maintain a temperature of around 100°F.

They only use the tail for maneuvering in the water and to reserve fat for their winter survival.

As for the legs, they’re webbed backward -like those of shrews- and are what help them propel themselves in the water. In addition, they use their strong black claws for digging.

As for the bill, it’s black, flat, and wide, with a soft rubbery texture. The nostrils are at the tip, unlike those of birds, and harbor a large number of olfactory receptors. In fact, they can even smell underwater, which is great for finding food.

Habits of the platypus

This animal is rather interesting for even more reasons. One of them is they can sting and inject venom through the spurs located on their legs. Both sexes have this characteristic but only males can produce this substance. It’s strong enough to kill small animals and can cause a lot of pain in people (it isn’t fatal though).

Platypuses use the sense of electroreception to detect their prey. What this means is that they identify movement generated by the muscular contractions of certain animals, especially worms, on which they feed. They also eat larvae, insects, crayfish, and freshwater shrimp.

They close their eyes, ears, and nose when diving, but can find food with the receptors located in their snout. Also, they use them to dig at the bottom of the lakes or streams where they live. In addition, they can spend a long time in the water and hold their breath for about 30 seconds.

And, as if the animal wasn’t striking enough, we should also mention the way they reproduce. The platypus belongs to the rare group of monotremes: mammals that lay eggs.

The mother builds a burrow of up to 65 feet long near the body of water she lives in. Then, after a complicated courtship in the water, where a male and a female join in circles, they finally mate between June and October.

Afterward, the female covers the burrow with leaves and reeds, which she traps with her tail. Each year they lay between one and three small eggs, similar to those of reptiles.

They’re about half an inch in diameter and more rounded than those of birds. These eggs first develop in the uterus (for about a month) and are then incubated externally for about 10 days.

The young are blind, hairless, and vulnerable when they hatch. They feed on mother’s milk, released through the pores of the skin as these animals have no nipples. This feeding period lasts about three months and the mother only comes out occasionally to look for food during this time. Finally, the babies are ready to leave the nest when they’re four months old.

We bet you’re amazed at this extraordinary animal!

Curious Habits of the Platypus
The platypus is an animal whose morphology is a hybrid between a bird and a rodent. In this article, discover the curious habits of the platypus. Read more »
Link copied!
Interesting Articles
Mammals
What Are the Differences Between Jaguars and Leopards?