The current domestic cat is the result of thousands of years of domestication. Amazingly, there are still some wild species out there, the Scottish wildcat is one of them. 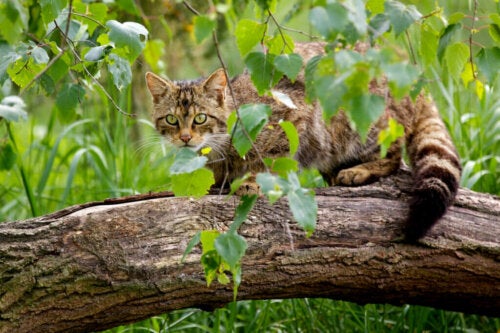 The Scottish wildcat is one of the remaining members of the wild fauna of the British Islands. It’s one of the last surviving species in a once densely populated area.

Nowadays, the fauna of these ecosystems is quite reduced in terms of animal diversity. Continue reading as today’s article contains information about the current situation there and will also discuss the conservation plans for this particular wildcat.

Scotland is the place of residence of this wildcat who’s currently the subject of a conservation action plan. This is due to the fact that it’s in critical danger of extinction. The name of this plan is “Breed and Release.” Thanks to it, the first center for conservation and breeding of wildcats in the Scottish Highlands is in the process of being built.

There are other recovery centers but this one will focus on Scottish feral cats only. The aim is to release specimens in different parts of Scotland in the long term. The creation of the center is the last attempt made for the conservation of this species because it’s on the verge of extinction –there are about 20-200 of them still alive.

This extreme situation derived from various factors such as loss of habitat and disease. Luckily, a litter of Scottish wildcats was recently born so there’s hope for them.

Characteristics of the Scottish wild cat

The scientific name of this cat is Felis silvestris and is typical of the Scottish Highlands. It’s slowly disappearing even though it used to populate a big part of the British Isles.

As usual, humans are mainly responsible for it because they’ve hunted this species for many centuries. Also, other relevant factors for the decrease in their population are the loss of habitat and hybridization.

A person with little experience in animals would mistake them for a domestic cat. However, they’re completely different animals. Here are some of the traits that differentiate Scottish feral cats from regular cats:

Strategies for the conservation of the Scottish wildcat

Here are some of the strategies for similar conservation plans to the one we mentioned above. The most used ones are:

Captive breeding is one of the most valuable approaches so as to control the number of offspring born and how many they should release into the wild.

It’s also a way to reduce the transmission of diseases and to aid their survival. This technique implies greater control of the situation of the species on a small scale but it’s also a responsibility. This is because they must know just when to release the specimens in order to maximize their chances of survival in the wild.

Monitoring them in the wild

The next strategy is to follow-up with the released kittens. They implant a GPS locator, usually in a collar, for this purpose.

As you can see, this makes it easier to follow them around and study their behavior. In addition, GPS collars usually have built-in cameras that record the events. In addition, there are cameras placed at strategic points (photo-trapping). The objective is to be able to protect the animals without disturbing them.

Avoiding hybridization with the domestic cat

One of the challenges faced by this particular program is the preservation of the Scottish wildcat genome. It seems that some romantic encounters with domestic cats have severely altered their genetic code.

Thus, it’s necessary to study the genome of the monitored wild populations. This way, more information will be available and the diversity of the population will increase. Researchers don’t know how this has affected hybridization yet but consider it the greatest risk of all. As you can see, one of the main intentions behind the proposed conservation techniques is to avoid it.

It’s also important to inform people, so they know what not to do if they run into a Scottish wildcat. These animals will flee in most cases and it’s not a good idea to go anywhere near them.

Unfortunately, people often mistake them for domestic cats and try to capture them so they scare them. This is why the organizations involved promote the message that the Scottish wildcat is an important part of the cultural heritage.

Actually, they’ve been a part of clan heraldry throughout history and they also had a role in British mythology, which describes them as bold fierce hunters in some stories.

The Scottish wildcat is on the verge of extinction

The conservation strategies of a species take place when the population number of certain wild species reaches a critical phase. This is currently the case of the Scottish wildcat, whose numbers have been drastically reduced.

We can prevent the permanent disappearance of these species thanks to projects like these. In fact, they’ve been successful in some countries and with certain species.