The Animals that Sleep the Least

While some animals sleep 24 hours a day, others sleep two hours at most. The fact that some domesticated species made the list of the animals that sleep the least may surprise you! 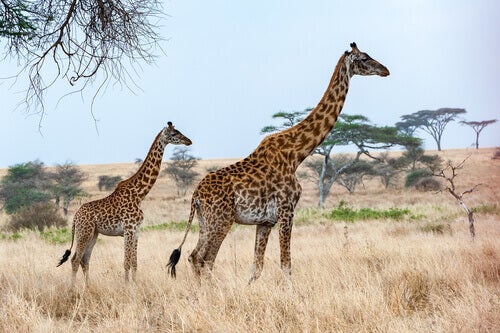 If you didn’t get any sleep one night because you were busy studying or working and had to resort to a few cups of coffee to endure, then imagine what it would be to get only two hours of sleep every night! Believe it or not, some animals don’t get that much sleep. In this article, we’ll tell you about the animals that sleep the least.

The animals that sleep the least

Before starting the list, we should talk about the species that never take naps or get any “beauty sleep”, since they need to be on the move to be able to survive.

This is the case of certain fish and sharks that get oxygen from the water that enters through their mouths, or of dolphins and whales, who must go to the surface to breathe. To rest, they “disconnect” a part of their brain and keep the rest active. Except for these cases, some animals get very few hours of sleep a day. Here are the ones that stand out the most:

This beautiful animal native to Africa, featured in the main picture of this article and known for its long neck and unique fur, is the animal that sleeps the least. In total, this animal sleeps intermittently for about two hours a day. In fact, it sleeps for about 10 minutes at a time!

The giraffe usually sleeps standing up. However, if it’s too tired, it can lie down and rest its head on its back.

We decided to list these three animals together, since they have one characteristic in common: they sleep about three hours a day. In the case of horses, any species, whether domesticated or wild, have the same sleep patterns.

They can rest standing or lying down and never sleep soundly. If they’re in groups or teams, they take turns staying alert, and take 15-min naps at most.

The donkey is a relative of the horse, which is probably why their behavior is similar. Domesticated donkeys can live in groups and “take turns” to rest. On the contrary, wild donkeys are loners and hardly ever sleep soundly.

Finally, we’re going to talk about the impala, a medium-sized antelope with light brown fur that lives in South Africa. This animal feeds on herbs, seeds, and leaves from the forests and savannas it inhabits. In addition to males having long antlers, they sleep the least of the herd, as they must take care of the others while they graze or rest.

The most curious thing about this bovid is that it pretty much has an alarm system. Exactly three hours after falling asleep, it opens its eyes and becomes alert.

The world’s biggest land mammal also doesn’t get much sleep – about three to four hours a day, in fact. Both African and Asian elephants live in herds led by females. They feed on herbs, fruits, shrubs, and bark. In fact, they can eat up to 440 pounds of food in one day. Their life expectancy is over 70 years.

These animals are both ruminants, live on fields, and humans use them for their own benefit. In addition, these two species get the same number of hours of sleep a day: four.

Both female and male cattle spend most of the day on their feet, feeding on grass and grasslands. They only lie down when they’re very tired, it’s excessively hot, or they’ve completed a digestive cycle, which can take eight hours.

Sheep behave in a similar way, as they graze for a long time. That may be the reason why they don’t have too much time to rest.

To finish this list of the animals that sleep the least, we have to mention the goat. This is another ruminant mammal that lives almost everywhere in the world. In fact, you can find both domesticated and wild goats in many places.

Goats don’t get more than five hours of sleep a day. This animal occupies the rest of its time looking for food (grass, bushes, stems, and leaves) in rocks or meadows, avoiding obstacles in the high mountains or moving from place to place along with its herder. Female goats dedicate a lot of time to caring for their young or getting milked.

Are There Any Animals that Don’t Sleep?
Falling asleep initiates a whole series of processes that helps the body recover, but it might seem that some animals don't sleep at all... Read more »
Link copied!
Interesting Articles
Mammals
Why Do Bears Like Salmon?