The Golden Lion Tamarin: Between Threats and Benefactors

The golden lion tamarin has suffered a series of influences that have almost caused its extinction. However, the joint action of the conservation organizations gives it hope for survival. 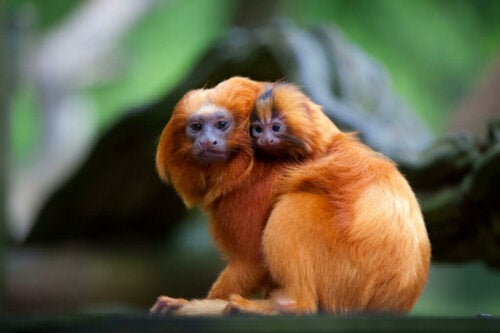 The golden lion tamarin (Leontopithecus rosalia) is a primate species of the Callitrichidae family, native to Brazil. The name “lion” comes from its abundant and silky mane, while its face is hairless.

Tamarins distinguish themselves from other New World monkeys by their small size. Hence, upon reaching adulthood, this small primate can weigh just over a pound, and measure 15 inches.

Where does the golden lion tamarin live?

Naturally, it inhabits the seasonal lowland rain forest on the coast of Brazil. The climate there is extremely humid, as the average rainfall is around 60 inches per year.

The golden lion tamarin occupies a forest layer between 30 and 90 feet above the ground. In addition, it needs and seeks areas of dense forest (closed canopy), abundant in climbing plants and fruit. These primates sleep in tree hollows to protect themselves from predators.

Gradually, the golden lion tamarin has lost between 95% and 98% of its original habitat. Today, its distribution is limited to three small areas of the tropical rain forest in southeastern Brazil:

Consequently, the golden lion tamarin has been able to adapt, to some extent, to living in degraded and secondary forests. However, its success depends on obtaining sufficient food sources throughout the year.

In addition to its silky golden mane and small size, the golden lion tamarin stands out due to its hairless face, flattened and with widely separated nostrils.

In terms of size, this species doesn’t have marked sexual dimorphism. Its body is covered with long hair that ranges from pale gold to a rich reddish gold.

Moreover, an important characteristic is that the golden lion tamarin has claws instead of flat nails. These claws allow it to cling to the sides of tree trunks. Moreover, they enable the monkey to move on all fours on small branches, whether walking, running or jumping. Hence, their locomotion is more similar to squirrels than primates.

Thanks to its gifted fingers, the golden lion tamarin can pull prey out of cracks and other hidden places, a behavior known as micromanipulation.

Thus, due to their elongated hands and fingers, insects make up 10-15% of their diet. These animals can travel across large territories (with an average of 123 hectares) to collect enough food resources.

The golden lion tamarins are a social species. In nature, they’re found in groups of two to eight individuals, often made up of family members. The groups include breeding pairs, one or two litters and possibly other relatives. These associations tend to be nuclear families, but can also be made up of large families.

It should be noted that these primates are territorial and defend their territory with scent marks and vocalized threats. The groups defend home areas ranging from 40 to more than 100 hectares. These home areas depend on the size of the group. Some signs of aggression from the animal are the open mouth, arched back and staring.

Usually, golden lion tamarins spend a large part of the day in grooming activities. The youngsters play a lot, chase each other, and fight.

When there’s more than one breeding adult in the group, one is usually dominant over the others. They maintain their supremacy by means of aggressive behavior. The relationship of dominance between males and females depends on the longevity of the group. A newly immigrant male will be subordinate to a resident adult female.

According to studies, golden lion tamarins are mostly monogamous and reproduce once or twice a year. Generally, only one female in the group reproduces during each breeding season. Gestation lasts between 130 and 135 days. The age of sexual maturity is 18 months for females and 24 months for males.

In addition, adults share the responsibility of caring for young offspring. At birth, the offspring is hairy and has its eyes open. It clings to its mother during the first weeks and to the nannies for a period of 90 days. However, in some cases, it’s been observed that the father prefers to care for a male offspring.

The intention of current programs is to strengthen the wild population and maintain a safe captive population in zoos around the world.

The golden lion tamarin is an endangered species

The distribution of wild individuals is limited to a few places in southeastern Brazil. Threats to the golden lion tamarin population include illegal felling, poaching, mining, urbanization and infrastructure development, and the introduction of exotic species.

Recently, a census promoted by conservation organizations estimated that 3,200 individuals remain in the wild. This figure is considered a resounding success, as in 1969 the wild population was estimated at 150 individuals. In addition, reports indicate that currently, there’s a captive population of about 490 individuals across 150 zoos.

Even if the survival rate of golden lion tamarins reintroduced into the wild has been encouraging, the destruction of its unprotected habitat continues. Despite progress made, the IUCN warns that the wild population has little potential to further enlarge the species in the face of the extreme habitat fragmentation.

Green Monkeys and Their Anti-Drone Alarm
Green monkeys are low-key, little known primates. A new study just revealed how these animals have their own anti-drone alarm. Read more »
Link copied!
Interesting Articles
Mammals
The Role of the Gray Squirrel in Forests