The Characteristics of Howler Monkeys

A leaf-based diet that's very low in calories keeps these monkeys from being very active. That way, they can reserve the little energy they get from their diet. What's more, the possess a natural "sounding board" that allows them to warn rival groups of their presence by using a loud call. We'll tell you more about the characteristics of howler monkey in today's article. 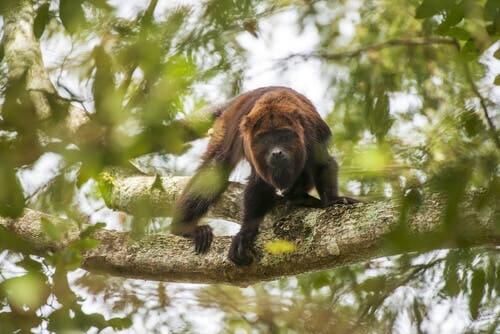 When we talk about the howler monkey, we’re referring to a genus of New World primates. These animals are known for having the strongest call in the animal kingdom. In the paragraphs below, we’ll tell you more about the characteristics of howler monkeys.

The physical characteristics of howler monkeys

One of the most unique characteristics of howler monkeys is their highly developed hyoid bone that they use to produce their calls. This bone acts as a sort of natural soundboard.

The howler monkey has a flat nose with quite a bit of distance between the nostrils. This gives it a unique appearance, along with its thick fur and its long prehensile tail, similar to that of the capuchin monkey.

It’s interesting to note that the howler monkey has trichromatic vision, meaning it can see three colors. That sets it apart from most monkeys in the animal kingdom who don’t have this ability. This rain forest dweller generally moves about on four feet. However, it’s also very skilled at using its tail, which is strong enough to bear the weight of the animal’s body.

Howler monkeys display sexual dimorphism, meaning that males and females have different physical characteristics. The biggest difference has to do with their size and weight. On the one hand, males are larger and can weigh up to 22 pounds. Females, on the other hand, usually don’t weigh more than 15 pounds. In some species, such as the mantled howler monkey, females have a yellowish coloring, while males are black.

It’s interesting to note that, unlike most monkeys in the animal kingdom, the howler monkey possesses trichromatic vision.

The behavioral characteristics of howler monkeys

Both males and female howler monkeys produce an extremely loud call, which serves as a warning for rival groups. It’s especially common to hear this call in the afternoon. However, you can also hear it at night, especially when there’s a full moon.

Howler monkeys are among the few New World primates that ingest fresh leaves. This food is difficult to digest and requires adaptations like rumination. What’s more, fresh leaves offer very little energy, meaning monkeys need to consume a large amount. Howlers must consume approximately 4 and a half pounds per day–which is about a third of their weight. In addition, they must reduce their movement in order to make the most of their energy.

This allows howler monkeys to ingest food that’s not in high demand in the jungle. But, in exchange, they must limit the energy they exert. Therefore, these animals are quite inactive and spend a great deal of time resting.

Howler monkeys generally live in small groups of about 5 individuals, consisting of both males and females. However, some species of these monkeys can come to live in groups of up to 20 members.

The characteristics of howler monkeys: Habitat and conservation

The habitat of howler monkeys encompasses different levels of tropical forests. They live mostly in arboreal regions of Central and South America. So, we can find them all the way from the south of Mexico down to the north of Argentina. However, their main areas of distribution are in Bolivia, Venezuela, and Brazil.

Most howler monkey species are under threat, but don’t have a high extinction rate. The trafficking of this type of monkeys for pets is much lower in comparison to other species like squirrel monkeys, even though hunting them for food is quite common.

Loss of habitat is also a substantial problem. What’s more, many are often killed out of the fear that they, like other primate species, may spread yellow fever. Countries like Brazil, for example, have suffered several outbreaks of this disease in recent times.

What’s true is that yellow fever doesn’t spread directly between primates–or at least the risk is very low. The main means of transmission is actually through mosquito bites. Attacks on primates actually increase the risk of the direct transmission of other diseases through bites and scratches. Not to mention that the killing off of any species is an ecological disaster.