The capuchin monkey is one of the most well-known primates there is. But do you really know much about them? 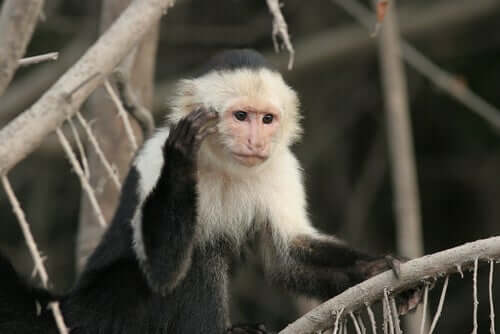 When talking about primates, the capuchin monkey is, without doubt, one of the most well known. This special monkey lives in South America and there are several different species, all belonging to the Cebidae family of primates.

They’re small monkeys, measuring just a foot and a half tall, and they usually have dark ridges or tufts on their forehead, which are related to their dominance within the group.

All species of capuchin monkeys have a prehensile tail. This means that they can use it as a fifth limb and it even has the same sensitivity as their hands.

Capuchin monkeys are very sociable primates and live in groups. They mainly eat fruit, tender leaves, and small animals, such as birds or insects. There are multiple species, although the following are the best known:

All species of capuchin monkeys have a prehensile tail. This means that they can use it as a fifth limb and it even has the same sensitivity as their hands.

This primate species has a reputation for being the smartest mid-size monkey, second only to the great apes. This is mainly because they are one of the best examples of animals that use tools.

Capuchin monkeys use rocks and stones to open nuts, and they teach their offspring how to do it too. They can also use other tools and, in fact, there is archeological evidence that they’ve done this for thousands of years. This would mean that this species’ tools are the oldest animal tools outside of Africa.

One of the most fascinating things that they do involves onions. This vegetable has anti-parasitic properties which the capuchin monkey uses to repel mosquitos and other insects. The groups call meetings, known as onion baths, where they each rub each other with an onion bulb.

But this doesn’t just keep the mosquitos away; it also functions as a form of social grooming. The individual monkeys thereby strengthen their ties to the rest of the group and help each other with hard to reach areas. When observed, they’re clearly very happy and make a lot of vocalizations.

Capuchin monkey groups call meetings, known as onion baths, where they each rub each other with an onion bulb.

All capuchin monkeys live in northern South America and Central America, and they’re all arboreal primates. This means that they live in the region’s rain forests.

Most species of capuchin monkeys are abundant in number, and not in any way endangered. There are only a few very threatened species, such as the golden-bellied capuchin or the blond capuchin.

However, although they’re not endangered, the more abundant species are still under threat. Unfortunately, their expressiveness and charisma have made them one of the most illegally trafficked animals, along with the pygmy marmoset. Obviously, then, you can’t have a capuchin monkey as a pet.

This has also made them victims of the movie industry. Young capuchin monkeys are taken away from their mothers to be trained as actors and end up appearing in well-known movies. Luckily, these days, they can be reproduced using special effects, but there are many productions that continue to use these animals.

The capuchin monkey still populates the largest jungle in the world, but both deforestation and the monkeys’ own charisma are endangering the future of the species and its ecosystem, which is one of the planet’s main lungs.

Meet The Bonobo: Behavior and Characteristics
The bonobo is one of the lesser-known species of primates, and one of the most fascinating among them. Learn more in this article! Read more »
Link copied!
Interesting Articles
Mammals
What Are the Differences Between Jaguars and Leopards?