Deer are a very large family of ruminants, ranging from large species such as the elk to the more unknown species like the muntjac. 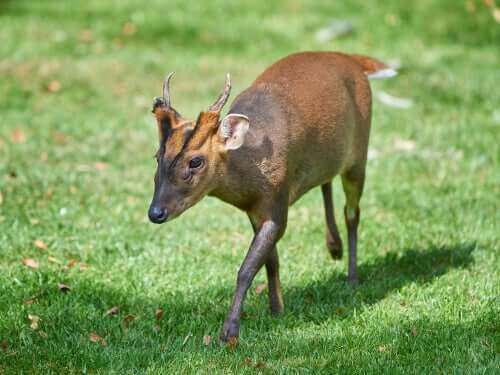 When we think of deer, we picture large species such as the elk or moose. All of them large, majestic, and with huge antlers. All of them imposing and inspiring respect and even fear. But what about the world’s least known deer? Do they fit this image? Below we’ll discuss them further.

Mule deer are found mainly in Canada, USA, and Mexico. They’ve also been introduced in Argentina. They’re known as “mule deer” because of their long ears, similar to a donkey’s ears.

They show sociable behavior most of the time. For example, females form groups with their offspring. Juvenile males are known to form groups of four to ten individuals. However, adult males live alone.

The marsh deer, one of the world’s least known deer

These can be up to 6.5 feet long and 3.9 feet tall. For this reason, they’re considered to be the largest deer in South America. They’re called  “guasú” in guarani, one of the official languages of a group of South American natives.

Today there are only small populations of them found near estuaries and lagoons of some South American rivers. They’re one of the species protected by the CITES agreement.

Marsh deer are also recognized by their branched antlers that can reach 23 inches.

The taruca or North Andean deer

These live in the Chilean Andes, although some can be found on the Argentine side of the Andes. They’re classed as an endangered species because of their popularity amongst hunters.

Tarucas are social and form small groups of two to three individuals. These groups are usually made up of a female and her offspring. But some individuals lead solitary lives.

The chital deer is native to Asia. Like Tarucas, they’re sociable and form both groups of females and males.

Also known as the “spotted deer” because the whitish spots on its coat don’t disappear after childhood, unlike other species of deer.

The pudus, the smallest species of deer

This species is also called “little deer” because of their size. There are several species scattered throughout the South American continent, living in the forests.

They’re 24-35 inches in length, only 11 inches tall, and weigh no more than 22 pounds. They look forever young because of their small size and short round heads.

These live in Southeast Asia, but they’ve also been introduced to Oceania and the USA. They live alone in the woods, apart from during mating season.

Muntjacs are a group of deer that originates from Southeast Asia, although later introduced to Europe. They inhabit jungles and forests and are no more than 18 inches tall.

Unlike other deer, muntjacs are omnivores. They eat eggs, carrion, and sometimes hunt small mammals or birds.

Water deer are found mainly in China and Korea. However, they’ve subsequently been introduced to Europe. They’re great at hiding and love living among reeds and tall grass. They also inhabit mountains, swamps, and grasslands.

Their most striking feature is that both sexes don’t have antlers, but have very prominent and highly developed canines. These canines measure up to 2 inches in males and are considered a dangerous weapon.

The sika deer, one of the least known deer in Asia

They’re originally from the far East, but have since been introduced to Oceania and Europe. They have a wide distribution, which led to numerous subspecies, many of them are island dwellers.

As we can see in the article, not all deer have antlers. Some are small and look much less threatening. They’re largely unknown, especially in Europe, where many of these species don’t exist, they deserve some recognition.

Barbary Sheep – An Invasive Species?
The Barbary sheep were an invasive species for years, but this concept is now a subject for debate. So, are they truly invading us? Read more »
Link copied!
Interesting Articles
Mammals
The Role of the Gray Squirrel in Forests