Most Callitrichidae are classed as titi monkeys, although there are a few species known as tamarins. 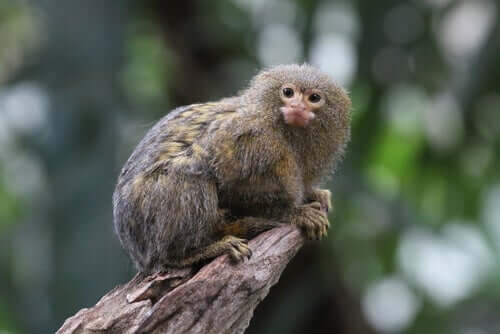 Titi monkeys are a very charismatic primate. Or rather, a group of primates, as there are more than 40 small species of titi, known as Callitrichidae.

All of them are small primates, although their size and weight vary between the 3.5-ounce pygmy marmoset and the 1.7-pound golden lion tamarin. The vast majority have two molars.

They all have opposable thumbs similar to ours, but don’t have prehensile tails. However, unlike many other primates, they have claws instead of fingernails.

They are diurnal primates, and very dependent on trees. Their diet revolves around them. Titis eat fruit and leaves, and even flowers, nectar, sap or the insects that live in trees.

All species of titi have quite different aspects. The best known is the common marmoset, which has hairy, white ears and a greyish-brown body.

The common marmoset (Callithrix jacchus), also called the white brush marmoset because of its ears, is one of the biggest victims of illegal trafficking. This species can live in larger groups of 20 individuals, and even coexist with other species such as the black tufted marmoset (Callithrix penicillata).

They are diurnal primates, and very dependent on trees. Their diet revolves around them. Titis eat fruit and leaves, and even flowers, nectar, sap, or the parasites that live in trees.

Tits are very territorial animals and live in family groups of at least 6 individuals. They are one of the few primates that frequently give birth to twins. Males play an important role in the care of their young, and siblings from previous births also help.

Just like other primates, they establish and strengthen relationships by grooming one another; it’s not just a technique they use to keep parasites at bay.

All titi monkeys can communicate by sound. They have very powerful shrieks that travel great distances, and even possess a kind of primitive syntax. They also use smell as a form of communication – leaving pheromones by rubbing themselves on trees.

All titis live in the rain forests of Central and South America, and mainly in treetops. Most of them live in the Amazon basin, particularly Colombia, Bolivia, Chile or Peru.

Deforestation threatens their habitat, but their main threat is illegal trafficking. These animals are illegally captured to serve as pets in Europe and the United States. Because they’re so small, they’re transported inside plastic bottles or wrapped in bridles, and many suffocate along the way.

In many countries it’s illegal to have a monkey as a pet, even small ones like titis. They may look adorable, but they’re very noisy and transmit many serious diseases. They’re also very aggressive and afraid of humans because we’re so big. Sometimes they feel threatened and can bite.

Titis have strong teeth that can tear bark away from trees, so they can enjoy tree sap. This means that when they bite, which is frequent, they can cause serious damage and transmit diseases.

These animals are illegally captured to serve as pets in Europe and the United States.

The Chimpanzee: Habitat and Characteristics
The Chimpanzee is the animal that's genetically closest to the human species, but it also has a less well-known and very interesting social life.Learn more! Read more »
Link copied!
Interesting Articles
Mammals
All About the Southern Right Whale Dolphin