This mammal, from the deer family, has curious qualities. For example, they can reach up to 37 miles per hour and their young weigh 35 pounds at birth. 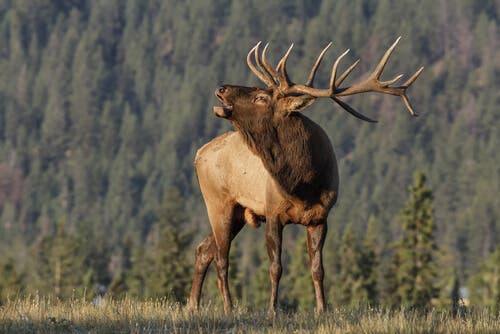 When we think of moose, you probably imagine a large animal with huge horns that lives in forests and grasslands of the United States and Finland. In this article, we’ll tell you about moose characteristics, behavior, and habitat. Unfortunately, this animal has been hunted for centuries.

This mammal belongs to the deer family, which includes deer and reindeer. Moose are large artiodactyl mammals (also known as even-toed ungulates). They are up to 10 feet in length, 6.5 feet tall, and over 1100 pounds.

Moose can live for 25 years. They are also a species with significant differences between males and females. Males have large horns or antlers that are up to 6.5 feet long. These horns are varied in shape, broad, and webbed. Without a doubt, this is the males’ most noticeable characteristic. It also allows them to be easily identifiable.

However, this is the only difference between the sexes. Females measure and weigh the same as males. In addition, both males and females have bulging and elongated necks, large eyes with separated eyes, and a long, soft muzzle. They also have a hump on their backs. However, the color of their coats can be very diverse. For example, they can be black, brown, beige, grayish, or a reddish color.

Until the Middle Ages, moose lived in the great forests of Central and Western Europe. However, due to hunting and the expansion of cities and towns, this species’ natural habitat has shrunk.

Thanks to different protective measures, environmentalists have converted areas into reserves so that moose can develop. As a result, mammals are now moving to other latitudes.

Basically, we can divide this species into two groups according to their natural habitat. On the one hand, we have some from Eurasia. On the other hand, we have some from America. The former inhabit the Caucasus Mountains, the Scandinavian Peninsula, Siberia, Poland, Ukraine, Slovakia, Austria, the Czech Republic, Germany, Finland, Mongolia, and Manchuria.

American moose live in Alaska (these are the largest in the world), in British Columbia, other Canadian regions, and the central and western United States, such as Oregon, Montana, Colorado, and Yellowstone National Park.

Moose are generally more active at sunrise and sunset. However, the habits of these animals change depending on the time of the year. In the summer, they live alone or in small groups. On the other hand, in the winter, they join other individuals to form groups of more than 10.

They sometimes make temporary migrations, especially during mating season and due to population density. However, moose are faithful to their territory. They don’t defend their territory from other individuals of the same species, but, instead, they all cohabit in harmony.

With very weak sight but a very developed sense of smell and hearing, moose feed on leaves, bark, branches of trees, aquatic plants, fruits, and any food from plants.

Long legs allow this species to reach high leaves. Also, if necessary, they go into lakes and rivers. In the water, they swim around in search of water lilies. In a single day, an adult male can ingest up to 45 pounds of leaves and plants.

Regarding their reproduction, both females and males reach sexual maturity when two years old. The mating season takes place between September and October. Mating includes nasal calls between couples and fights between males to show their power. After mating, the female breeds their young for approximately 250 days.

Young females give birth to a single fawn in each pregnancy. However, as they age, they can give birth to two or three in the same litter. In fact, there can be a difference of up to 15 days between each birth!

The young weigh around 35 pounds when they’re born. After three days, they can already follow their mothers. The mothers are very protective and can attack predators with their hooves.

Besides this aggressive reaction and the pre-breeding fights, moose are passive animals. Although they can reach a speed of up to 40 miles per hour, they usually have slow and heavy movements.

The term polyandry comes from the Greek polýs (many) and Andros (man), and refers to the females of the animal…

Wild Animals
The Symbiosis Between Coral Reefs and Microscopic Algae

Coral reefs and microscopic algae are among the most diverse ecosystems on Earth. In fact, the Great Barrier Reef in…

Mammals
The Behavior of the Red Panda

Despite its nickname, the red panda has very little to do with the giant black and white bear with whom it shares its name and habitat. Red pandas are much more similar…