Constrictor snakes are characterized by their ability to strangle prey to the point of suffocation. What's more, they can swallow animals whole because of how wide their jaws open. 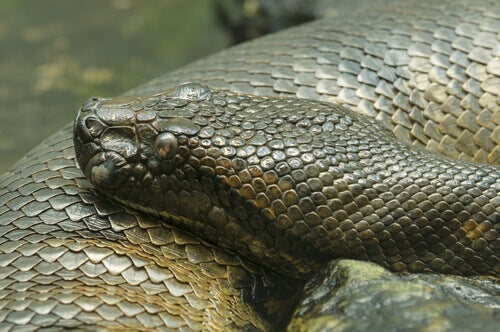 Very large, and with the ability to strangle their prey, constrictor snakes are usually not poisonous and can eat whole animals due to their ‘unsettled’ jaws that open in an amazing way. Learn more about them below.

Constriction is one of the most amazing techniques in the animal kingdom. It consists of the strangulation of the victim once the predator has wrapped himself around it. It’s not a matter of breaking bones or crushing them, but of preventing them from breathing.

Therefore, the prey dies of suffocation. Some constricting snakes that carry out this mechanism in order to feed are the following:

This South American endemic reptile, which appears in the cover photo of this article, is the largest and heaviest in the world. Although there’s documentation of many cases of attack on human beings, it only acts that way if it feels threatened.

It’s dark green with oval brown markings, has a lighter belly, and the pattern of the tail is unique to each specimen. Scales cover the snout and both the nose and eyes are ‘raised’ to be able to submerge the whole body except that part in the water and stalk their prey. These include tapirs, capybaras, deer, rodents, fish, amphibians, coatis, and reptiles.

There are different species of rainbow boas, and they all live in South America, more precisely in the warm regions. Their scales can be of various colors, always with a light or brown background and patterns of different tones, hence their name.


The rainbow boa is a nocturnal, shy, slow, and bulky animal that feeds on small mammals and sometimes birds. It reproduces in spring and the gestation period lasts about five months. By summer, females produce eight eggs and their young are about 12 inches long.

Next on our list of constrictor snakes is the reticulated python, which lives in Southeast Asia. It ‘competes’ with the anaconda over which is the biggest in the world. They usually measure about 16 and a half feet, which is quite considerable. However, there are records of specimens measuring 26 feet long and weighing almost 300 pounds.


Its head is elongated and its muzzle is flat and wide. Its mouth is equipped with around a hundred teeth and its eyes are yellow with black pupils. The snake’s body is yellow, ochre, or with brown tones on the back and white on the belly.

It feeds on rodents, birds, reptiles, monkeys, wild boars, turkeys, and deer. It’s very agile and fast, has nocturnal habits and can climb trees to hunt.

This is one of the best-known constrictor snakes, native to the Americas -from Mexico to Argentina- and prefers habitats with little water, such as savannahs and deserts. It’s an arboreal snake, and sometimes spends time on the ground.


The boa constrictor can measure up to 13 feet – females being larger than the males – and has a very attractive coloration in reddish, white, golden, and pink tones. Before molting, it’s grayish in color and not very attractive.

These constrictor snakes don’t see very well, so they use their thermosensitive scales to detect prey: birds, lizards, bats, rats, opossums, and squirrels. They’re solitary and nocturnal, and hide among tree branches.

This species of constricting snake lives in the forests of Australia, the Solomon Islands, and Papua New Guinea. And, as its name suggests, it has green skin which is quite bright and striking, with lighter areas on the belly.


It can measure 8 feet and spends many hours a day curled up in the branches of trees with its head hanging down. This allows it to identify prey, as it has thermoreceptive pits. Its diet is based on rodents, reptiles, and only in exceptional cases, certain birds.
Discover Eight Animals That Live in Rivers
Today, we wanto to tell you about 8 animals that live in rivers and have adapted to these water currents and their unevenness. Read more »

Belonging to the order Passeriformes, this great black bird has gained many different characterizations over time. Scientists are currently undertaking more and more studies in order to verify its capacity…

Illnesses and Treatment
Bovine Sadness Complex: What Is It?

Bovine Sadness Complex is the colloquial form for a group of diseases that regularly affect cattle. It's a syndrome caused…

Animals
Discover the Fauna of the Arabian Peninsula