The Largest Ophidian in the World: the Anaconda

Native to the Amazon River area, this large reptile swallows its prey, which it previously suffocated as a good constrictor snake always does. 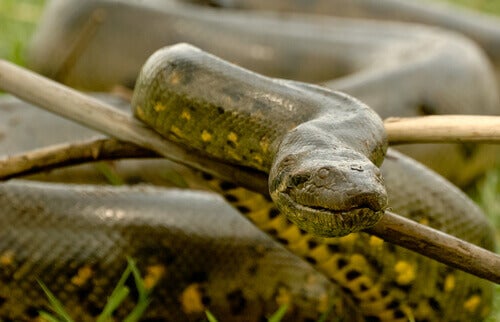 It’s large, fearful looking, and belongs to the boa family. The anaconda is the largest ophidian in the world and lives in the tropical rivers of South America. Meet this giant in this article!

It’s a species endemic to South America, specifically to the Amazon, Orinoco, Paraguay, Putumayo, Napo and Paraná river basins. It can be found mainly in Brazil, Colombia and Venezuela, but it’s also present in Paraguay, Peru, Bolivia and Ecuador.

Anacondas like to be in water as well as in trees, and they prefer stagnant water ponds rather than fast-flowing rivers. They spend many hours underwater stalking their prey, while their muscles make them rapid swimmers.

Even if their skin has no commercial value, it’s sometimes used for leather goods. However, this isn’t the main threat they have to overcome.

They’re facing the destruction of the forest and persecution by farmers who consider them a risk for children and cattle. What many don’t know is that the anaconda plays a very important role in controlling rat infestations.

Traits of the anaconda

Of all the snakes that exist, the anaconda is the heaviest. It also “competes” with the reticulated python for the title of biggest snake in the world. Even if it’s extremely feared by people, this snake won’t attack unless it feels threatened. Luckily for us, we aren’t part of its food chain… However, we should still be very careful if we come across it!

It’s dark green with black and ochre oval markings and a lighter belly. As it’s the largest ophidian in the world, the anaconda is also very easy to distinguish by its size and length. The design of the end of the tail is unique to each specimen, as if it were a fingerprint.

The snout is covered by three scales on each side and this is the main trait that differentiates it from other snakes, and which includes it within the boa genus. With a small head, elevated eyes and nostrils that allow it to swim and breathe at the same time, this ophidian has its olfactory receptors on its tongue, just like the other snakes.

As for its size, there are different debates about it: the largest documented one measured 8.56 meters (28 feet), however they usually reach five meters (16 feet) in length.

The main rivals of this ophidian are the jaguar and the caiman, with whom it competes for the “big” food, namely, tapirs or capybaras. It also consumes peccaries, coatis, large rodents, young deer, fish, eggs, and reptiles.

When the animals get close to a pond to drink, the anaconda takes advantage to catch them with its strong jaws, then it curls around the body and suffocates or drowns them. The attack doesn’t last more than 10 seconds.

When it finds prey on land, it can drop from a branch and surprise it. Its strength allows it to press on the thorax and prevent the animal from breathing.

One of the main characteristics at the time of eating is that it doesn’t crush its food, but swallows it whole. How does it do this? Its jaws unlock and open. It hooks the meat of the animal with its sharp teeth and crawls until it devours it completely. It may even need weeks to digest it. During this time, the anaconda acts as if it were asleep close to water or on a branch.

Reproduction of the anaconda

The mating season takes place between April and May. The females attract their “suitors” with an olfactory signal. During the last phase of courtship, there can be up to 12 males fighting for a single female. She selects the winner, with which she intertwines the tail during insemination.

Why the Hippopotamus is a Dangerous Animal
Despite being an herbivore with a seemingly peaceful appearance, the hippopotamus is dangerous animal. In fact, it's even more dangerous than the lion. Read more »
Link copied!
Interesting Articles
Reptiles
The Many Types of Non-Venomous Snakes