5 Reptiles that Live in the Amazon

Found in trees and rivers, these animals stand out either due to their striking colors or their strong jaws. The largest and most lethal snake in the world is found here. 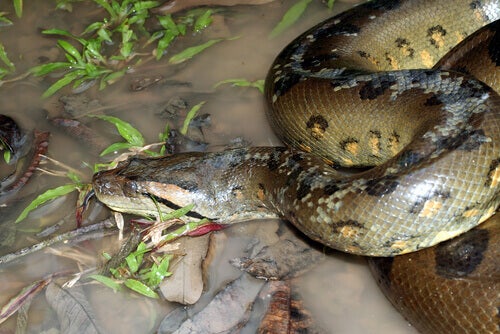 Within the great biodiversity of the largest tropical forest in the world, we can find thousands of species. But this time we’ll talk about 5 reptiles that live in the Amazon. Would you like to know them? Then keep reading this article.

What are the reptiles that live in the Amazon?

The “green lung of the planet” is home to millions of animals and plants. All of them are dependent on trees and rivers. Among the reptiles that live in the Amazon, we can highlight:

The green anaconda is a constricting snake belonging to the boa family, and endemic to South America. This snake —in the first photo of the article— competes with the reticulated python for the title of biggest snake in the world, as it can measure up to 4 meters (13 feet) and weigh 17 kilos (38 lb).

Its skin is dark green with black and ochre oval markings, its belly is lighter and its snout is covered in scales. Furthermore, its tongue serves as an olfactory receptor, which allows it to find food on trees and in water.

When hunting, it suffocates the prey and then swallows it whole —it can unhinge its jaws in order to open its mouth wide enough for this task. Therefore, after swallowing, it spends perhaps a week digesting. Its diet is based on capybaras, tapirs, rodents, fish, amphibians, reptiles and eggs.

The spectacled caiman is another of the most famous reptiles that live in the Amazon. It’s carnivorous and inhabits freshwater bodies, swamps and marshes. The males reach 2.5 meters (8 feet) in length, and the females are almost half that size. During the breeding season —the rainy season— they make a nest out of vegetation and soil, and lay up to 40 eggs, which incubate for more than three months.

The spectacled caiman feeds on crustaceans, birds, reptiles, fish, amphibians and mammals of different sizes. Moreover, its name is due to the bulge in the area of its eyes, which makes it look like it’s wearing glasses. The rest of its body is dark green and covered with scales.

This turtle lives in the rivers and lakes of the Amazon, and is also known as the yellow-spotted river turtle. Its carapace is olive green or brown, the skin on its legs, head and tail is gray, and it has scales around its face and skull, which makes it look like it has a protective “helmet”. Also, young specimens have yellow spots on their faces, which darken as they grow.

It’s considered a “side-necked turtle” because it doesn’t hide its head in the shell straight on, but rather bends its neck to the side. Additionally, it’s a skillful and playful swimmer, and loves sunbathing in the morning. Furthermore, it feeds on fish, plants and small invertebrates, being a really skilled hunter, especially in water.

This lizard, native to Central and South America, is a sort of combination between an iguana and a dinosaur. It has scales on the top of its head, on its back and tail, which gives it a more daring appearance.

Further, one of the curiosities of the basilisk is that it can walk on the surface of the water without sinking, thanks to some fringes of skin on its feet that serve as fins. To achieve this, it has to increase its speed, hence this is the technique used to escape danger.

This member of the Alligatoridae family is the only living species of Melanosuchus left. As its name indicates, it’s black, which allows it to camouflage itself in the environment. Also, it spends most of its time in water, and is one of the most feared reptiles that live in the Amazon.

The black caiman feeds on large animals, especially mammals, such as deer, capybaras and tapirs. Further, adult males can measure up to 6 meters (20 feet) in length, including its long tail.

All About the Giant Armadillo
The giant armadillo is a large animal that lives throughout most of South America. It's in danger of extinction due to illegal hunting and loss of habitat.  Read more »
Link copied!
Interesting Articles
Reptiles
Types of Lizards in the Animal Kingdom