The Care and Characteristics of the Argentine Black and White Tegu

Not all pets are dogs and cats. The Argentine black and white tegu, a huge reptile, is the perfect pet for those looking to add an exotic touch to their routine. 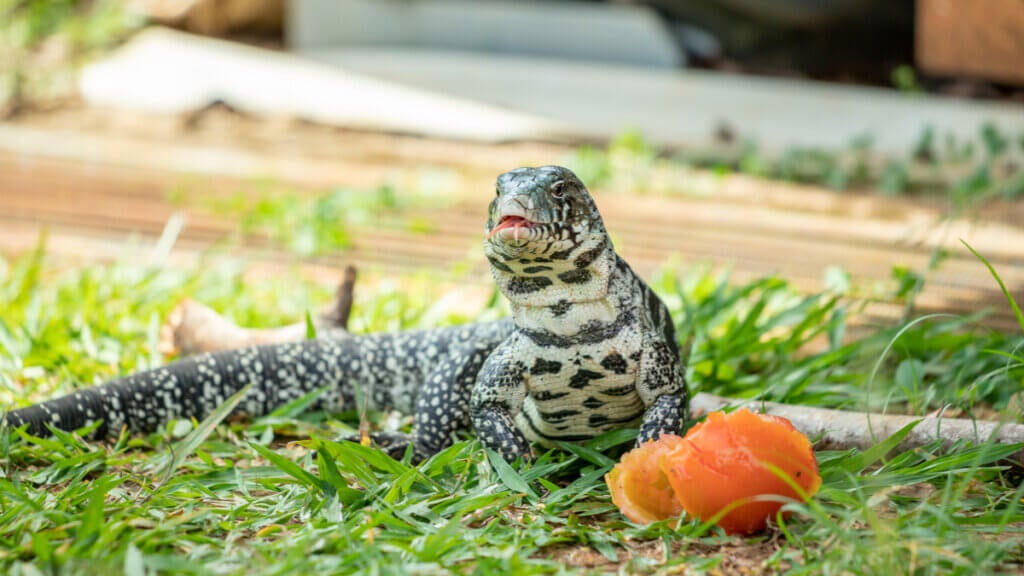 Can you imagine a lizard the size of a dog walking on a leash on the sidewalk? As outrageous as this situation may seem, the Argentine black and white tegu is the domestic reptile that most resembles dogs in terms of behavior.

Today we want to talk about the species Salvator merianae. Despite its ferocious appearance and intimidating size, this animal is one of the favorite exotic giant pets among the most adventurous owners.

Get to know the Argentine black and white tegu

The Argentine black and white tegu is the largest species within the Teiidae family of reptiles. Here are some of its characteristics:

A very striking feature of these lizards is that they’re one of the few partially endothermic reptiles, according to studies. This means that they can have a body temperature that’s up to 50 degrees Fahrenheit higher than the environment during the reproductive season.

Most reptiles are ectotherms, that is, their body temperature depends completely on the environment.

First of all, it’s important to note that the possession of a tegu is illegal in some countries. For example, in Spain, it’s illegal to possess any reptile that reaches more than 4.5 pounds in the adult stage (tegus reach up to 15.5 kilograms).

Furthermore, you need to be 100% sure that the reptile comes from a professional breeding farm. Any animal captured from its natural environment is one less in its habitat, which promotes the extinction of its species in the long term.

Once you’ve taken these factors into account, the most difficult part of adopting a tegu remains. The requirements for your terrarium are as follows:

As you can see, this is an animal that’s not as demanding as a dog in terms of outings and exercise, but it certainly requires exact environmental parameters. Therefore, it’s crucial that you monitor the temperature and humidity in the terrarium continuously.

Tegus feed on a wide variety of foods, as they are omnivorous. In juvenile stages, they usually prey on invertebrates such as beetles, crickets, snails, and spiders. With time, a greater contribution of protein in the form of meat and fish becomes necessary.

Diet isn’t a problem for these animals, since they also eat fruits, vegetables, eggs, and many other vegetables. Let’s remember that, as with any other domestic animal, variety is the key.

Finally, it’s important to emphasize that tegus are calm and relatively sociable animals. For example, they allow their owners to touch and even hug them. In many cases, they accept the placement of harnesses to go for a walk during the hottest hours of the day.

Just the same, getting to this point requires a slow process of familiarization with the animal. Remember that these reptiles are not predisposed to interact with us, as is the case with dogs.

As we’ve seen, tegus are pets with very specific requirements and a high entry cost. That’s because you have to invest in a large room, heating blankets, and UVB light sources.

Even so, once accommodated, this animal is undemanding, autonomous, and, at the same time, capable of receiving affection and recognizing its owner. Of course, having a reptile over a meter long come to your call to climb on your lap in a gesture of affection is priceless.

Exotic Pets – Types of Domestic Snake
With exotic pets becoming more and more popular around the world, we want to take a look at some of the different types of domestic snake. Read more »
Link copied!
Interesting Articles
Reptiles
The Largest Ophidian in the World: the Anaconda

It’s large, fearful looking, and belongs to the boa family. The anaconda is the largest ophidian in the world and…

So far, there are 20 known species of horned lizards, all in the genus Phrynosoma. Each of them differs according…