Types of Lizards in the Animal Kingdom

These reptiles come in all different shapes and sizes, and can live in any type of habitat, from the tropics to prairies and mountains. Some are large and fearsome predators… 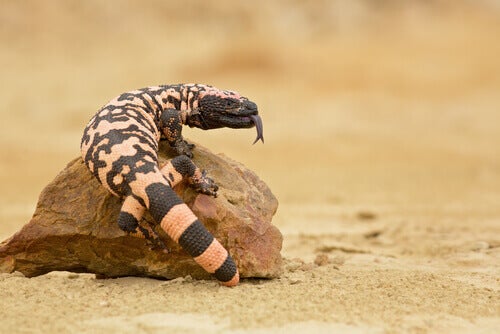 Lizards are one of the most numerous and diverse suborders of reptiles known. They inhabit all continents, with the logical exception of Antarctica. To get to know a little more about the fascinating world of reptiles, here you’ll find out all about the main types of lizards and their different traits.

How many types of lizards are there?

Considering the enormous biodiversity of the animal kingdom, it’s difficult to specify the number of members of each family or genus of lizard. Currently, there are 5,600 known species, which are grouped into 46 different families. There are lizards that measure just a couple of inches, and others, like the legendary Komodo dragon, which can grow up to 10 feet long.

Most lizards are native to warm climates, mainly in tropical and subtropical regions. However, they can make their “home” in various environments, from humid areas to prairies or mountainous regions. And some species are also capable of inhabiting deserts that are totally inhospitable to most other animals.

In addition, many species have a remarkable capacity to adapt, some even resorting to hibernation to survive in low temperatures.

The 5 most popular types of lizards in the world

As it would be impossible to summarize all the 5,600 types of lizards in this article, we’ll introduce you to the five most famous “groups”. Some of these lizards are so popular that they’re also frequently kept as exotic pets.

This species of lizard — whose photo appears at the top of this article — isn’t known as a monster by accident. On top of being poisonous, it also looks pretty ugly and scary. Its body is large and tough, with dark shades of brown with lighter spots.

However, these lizards from the United States are very intelligent and aren’t usually aggressive. Naturally, the necessary care must be taken when coming into contact with any poisonous wild animal.

The geckos include more than 1,500 subspecies of lizards. They’re known for their small size and green color. Some measure only 1.2 inches in total length, and weigh just 0.3 ounces. Possibly the best known variety is the Leopard Gecko, which has become popular as a pet in recent years.

Geckos are often adopted as pets by first-time “reptile keepers”. That is, those who have little or no experience in raising a lizard. Because they’re docile and small, they’re easier to handle and care for than iguanas, for example.

In addition, they’re the only type of lizard that has vocal cords, so they can make sounds in order to communicate. This allows them to socialize better with their keepers and also with other animals.

Without a doubt, iguanas are among the best-known lizards in the world. Their large size and remarkable beauty make them easily distinguishable from other lizards. In fact, they’re among the largest lizard species in the world.

The most famous species of iguana is the Green Iguana, which is native to Central and South America. It was widely adopted as a pet in many countries, but isn’t recommended for inexperienced keepers. They’re large, require a lot of specific care, and can become territorial as adults.

In this family we also find the only variety of marine lizard known to this day. This is the Galapagos Marine Iguana, a species endemic to the Galapagos Islands in Ecuador.

Marine iguanas are large and easy to identify by the crown of thorns they have on their heads. Incredibly, they can dive to depths of up to 100 feet!

At the other end of the spectrum is the Desert iguana, which lives mostly in the driest areas of the Mojave Desert. They’re quite large, sometimes growing to more than three feet long as adults.

Chameleons are certainly the most friendly and curious lizards we know. Their ability to change the tone and appearance of their skin to fool their predators is truly dazzling.

They also stand out because of their very prominent eyes and their huge, wide, retractable tongue. Nowadays, chameleons live in Spain, Hawaii, Asia and California.

The Komodo dragon is surely the most awe-inspiring of all lizards. Originally from Indonesia, they’re often considered the most dangerous and aggressive lizards in the world. They’re huge, tough animals that can measure more than ten feet long and weigh up to 150 pounds.

The Pros and Cons of Keeping Lizards as Domestic Pets
More and more people are choosing to keep lizards as domestic pets. While it might seem strange at first, reptiles have been growing in popularity. Read more »
Link copied!
Interesting Articles
Reptiles
Boa Constrictor: Characteristics, Behavior, and Habitat