What are Bearded Dragons?

Do you like reptiles? Learn about all of the advantages of owning bearded dragons and the proper way to take care of them. 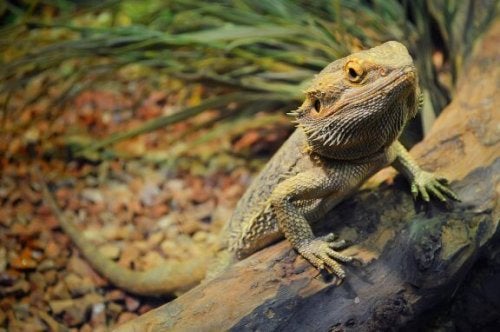 Bearded dragons are small and friendly lizards that have gained a lot of popularity as pets in recent decades. They are currently the most well known species of the Pogonas genus. In this article, we’ll tell you more about the bearded dragon, its physical characteristics and behavior.

We generally use the term ‘bearded dragon’ to refer to various species of the Pogonas genus. The species that’s most popular as a pet in most countries is the Pogona vitticeps. So, we’ll focus on this type of bearded dragon’s characteristics.

Bearded dragons are small lizards that usually measure between 50cm and 60cm in adulthood. The species’ average body weight is around 400 to 500 grams. It has a triangular shaped head with numerous spiny scales around it; these scales also cover its entire body.

When the animal feels threatened or scared, it inflates the scales on its head and they turn a black color. This is one of his most outstanding skills. However, if you have a pet bearded dragon that does this, it’s not a good sign. A bearded dragon that feels comfortable in its home won’t use this defense mechanism.

Bearded dragons have an obvious sexual dimorphism that makes it easier to differentiate between males and females. Males are the only ones that show femoral pores inside their sacks.

Both sexes can have different tonalities to their bodies. The most common are green, reddish, gray, brown and orange. Also, we have to emphasize that a bearded dragon’s color can vary according to the temperature of its surroundings and its state of mind.

Character and behavior of bearded dragons

These animals are great as pets because they’re beautiful, but also because of their adorable character. Bearded dragons are usually very docile and well-balanced, highlighting the sociability of their temperament.

That’s why the bearded dragon is usually one of the most recommended species for beginner pet owners. Because of their docility and small size, they’re easier to handle and care for than larger reptiles that have a more complex temperament-like iguanas.

Another advantage of adopting a bearded dragon as a pet is that these animals are also considered stable in nature. That means that they’re not considered an endangered species.

Remember, carrying out a responsible adoption is very important. You shouldn’t buy pets from an unknown individual through the internet. The best thing to do when adopting your reptile is look for approved vendors or hatcheries or rescue centers for exotic animals.

Bearded dragons are native to southwestern Australia, more precisely the savannas and deserts of this region. They are also naturally found in the states of New South Wales.

When adopting a bearded dragon as a pet, you’ll have to provide it with an environment that’s conducive to its physical and cognitive development. These small reptiles feel comfortable on earthy or sandy substrates. Also, they enjoy having branches, small sticks and stones around them.

You’ll want to pay special attention to the temperature and humidity of their terrarium and its surroundings. Since they’re accustomed to hot and dry climates, the average temperature of their environment should be between 30 and 36 degrees Celsius during the day, then down to 21 to 23 degrees Celsius at night. Additionally, the humidity should never be above 50%.

Diet and health of the bearded dragon

In the wild, bearded dragons are omnivorous animals that usually have a varied diet. The foods in their diet vary according to what’s available to them in their habitat and what time of year it is.

Therefore, it’s important that you offer your pet a complete and balanced diet, according to its nutritional needs.

Along with fruits and vegetables, you’ll also want to include small animals, like insects and snails, in their diet. You can find a good variety of food for them in pet stores that specialize in reptiles.

Bearded dragons also require proper preventative medicine. These small lizards are especially vulnerable to ectoparasites, like mites. Therefore, you should be extremely careful when sanitizing your pet’s terrarium and your home.

What are Monitor Lizards?
Do you want to know more about the reptiles that most resemble dragons? We'll tell you all about monitor lizards. You'll be amazed by this amazing reptile. Read more »
Link copied!
Interesting Articles
Reptiles
Asian Water Monitor: What Does it Eat?