Usually, forest fires imply short and long-term changes. Indeed it's a difficult environmental situation to deal with but there are times when humans can rescue animals from these kinds of disasters. 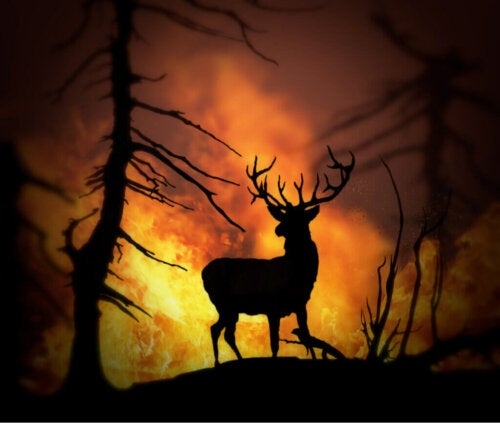 Forest fires and the animals rescued from them frequently make the summer news. In fact, just this past August [2020], a major fire in California led to the rescue of over 1000 animals. This action, rooted in human empathy, makes you want to believe in the goodness of our species.

Do you know what the effects of fires are on the various ecosystems and the species that live in them? Are you familiar with the protocol to follow in the face of this kind of natural disaster? Today’s article will answer these and many other questions.

Numerous forest fires had already been reported in Northern California by the end of August 2020. These devastating events are synonymous with destruction, loss, and desolation.

However, there are times when animals and even certain areas can be saved from the fire. This gives one hope about a possible future ecological renewal. In fact, this is the case, as per a report from a veterinary team of the University of California Davis.

This team treated more than 1,000 animals rescued from the Californian fires. Most had minor injuries and were quickly released. However, at least 30 animals require additional care. It’s for this reason that they had to stay at the vet hospital at the University of California Davis.

The animals that received treatment range from cats to cows to an alpaca.

The LNU Lightning Complex fires were responsible for their injuries. Estimates indicate that about 1.25 million acres of land burned down. To give you an idea, the area is larger than the Grand Canyon and led to the evacuation of hundreds of thousands of people who had to leave their homes behind.

How to deal with forest fires

This is a situation one hopes never to have to deal with; however, knowing how to react in the event it occurs doesn’t hurt. Thus, there are certain things you can do in the event of a fire. Continue reading to find out.

Keep your cool and act responsibly

Indeed, this kind of situation doesn’t inspire calm, but panicking will only cause bigger problems. It’s for this reason that you must keep your cool (literally), especially when there are vulnerable people or animals around. So, the first thing you must do is reassure them. In order to avoid stressing them further, follow these guidelines:

What to do with rescued animals?

Only firefighters and trained volunteers should participate in the rescue of animals. This is because it’s a very stressful situation for the animals. Keep in mind that you could worsen an animal’s condition if you don’t have the right tools to handle the situation. There are some things you can do though:

Watch for other meteorological factors

There are times when there are weather factors in addition to a forest fire. These could either help to put it out it or worsen it. Never go uphill when the fire is on a hill. It’s always best to go through the areas that already burned up while avoiding any holes and ravines.

It’s also advisable to head towards natural barriers such as rivers or roads because these are firebreaks. Also, figure out the direction of the wind and move in the opposite direction.

Can one remain at home?

Houses can be safe havens in the beginning as long as there aren’t any evacuation notices. The first thing you should do if you’re inside a house is to close any doors, windows, and blinds. In contrast, try to access a hose you can wet the roof and surroundings with if you’re outside. Very important: disconnect any diesel, butane, and natural gas supplies, but only if you can do it safely.

Keep on checking for news from relevant authorities in case they issue an evacuation notice. They should be able to inform you about the safest routes to do so as well.

Forest fires are relatively frequent natural phenomena that cause major damage. Unfortunately, fauna and flora are the main victims in these situations.

That can be caused by various factors but you must try to avoid them as much as you can. Do try to protect any vulnerable beings around you in any way you can. This is because only by raising awareness among the global population will the news about rescued animals stop flooding the news.

Horses Rescued from Flood Give Birth: The Miracle of Life
Today we bring you the wonderful story of the horses that gave birth after having been rescued from the Wellingborough floods, a true miracle of life. Read more »
Link copied!
Interesting Articles
Mammals
The Role of the Gray Squirrel in Forests