Three Puppies Trapped and Rescued in an Avalanche in Italy

A recent avalanche in Italy that took several people's lives has left a deep mark on the town, and the entire country. This is the story of how three puppies that had been trapped under it were rescued. 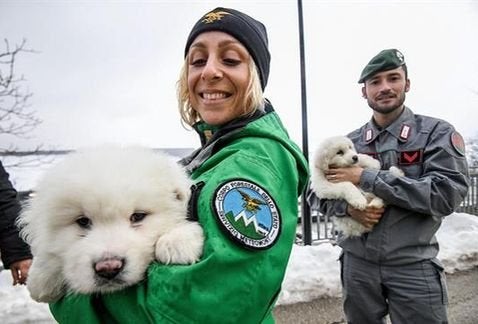 Natural disasters can affect anyone, and can suddenly turn you into a victim without any warning at all. Or, even if you aren’t directly affected, you still suffer for those who are. But there are victims we often don’t think about: animals. Thankfully, that wasn’t the fate of the group of puppies trapped in an avalanche in Italy.

The disastrous avalanche in Italy

The avalanche in question happened near the Hotel Rigopiano in Farindola, Italy. Several people died, though rescuers were able to save several people too.

The avalanche buried the hotel, and rescuers had a hard time getting in to help. The hotel’s naturally beautiful location ended up being its greatest weakness, because the avalanche completely wrecked its foundation.

It was a terrible event that has hit the town, and all of Italy, really hard. One of the rays of light in this sad story is that rescuers managed to save three puppies. What made this even better is that it gave them hope they’d be able to find more survivors.

As the rescuers were in the middle of their vital work, they heard a sound that definitely wasn’t coming from any of the humans trapped in the rubble. It was a dog whining!

The goal of any rescue team is to save lives. It doesn’t matter whether they are animals or people. So, some of the team members immediately followed the whines and started removing the rubble around the area.

They quickly and efficiently got the stones and debris out of the way. The whines got louder and louder, so loud that it seemed like there was more than one dog. Imagine their surprise when they found not one, but three! The puppies had been trapped under the debris for five days without food or water.

They couldn’t believe the puppies had survived, and this gave them a lot of hope. It hadn’t been easy to reach them, but they didn’t regret doing it one bit. Apparently the puppies were in the boiler room, and the rescuers actually had to knock down an entire wall to get to them.

Even more unbelievable, they seemed to be perfectly fine, and were happy to get all the kisses and affection from the rescue team. Minutes later, the rescuers sent them off to a vet to get the care they needed.

Where did the puppies come from?

That’s the question a lot of people asked when they heard the story. The answer didn’t take long to come, when two other survivors appeared: Nuvola and Lupo.

These two Maremma sheepdogs belonged to the hotel, and were its guardians. They also happened to be the parents of the puppies.

The strength of these little puppies gave the rescue team a lot more hope they would find more survivors. After all, if a tiny, dependent little puppy could survive without food or water for five days, then a person could too.

They did go on to save more people, though not as many as they had hoped. But they were happy to have, at least, saved some lives, including these puppies, who were definitely worth the effort.

There are lots of stories of dogs risking their lives during disasters and dangerous situations, all to save other people. We love how the roles got flipped in this story!

Our furry little friends deserve no less. They’re so loyal that they would do anything to protect us, and love us with all their hearts, so we certainly owe them the same, don’t we?

Medical Response Dogs Who Save Lives
Pets have can improve our lives and make us happier. But some dogs even save lives. We want to share a story about medical response dogs who go to school... Read more »
Link copied!
Interesting Articles
Responsibility
Excessive Humanization and Social Networks: Risks for Your Pet