Swans - Characteristics of a Most Graceful Animal

This most graceful animal is extremely beautiful. It's a monogamous species whose mating ritual is like a water dance. They're particularly gorgeous when they unfold their wings in preparation to fly. 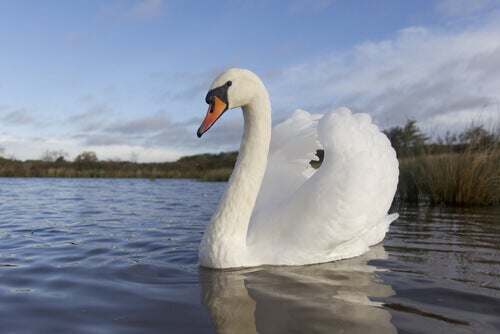 The swan is a most graceful animal and has been a symbol of beauty and eternal love for hundreds of years. Today we’re going to tell you a little bit about them and their daily habits. But before we get into their behavior and such, let’s look at some of their general characteristics.

The swan, a most graceful animal

The swan is almost entirely white, which highlights the intense orange of their beak and the black spot that surrounds their eyes and tops its beak.

Swans are larger than ducks. Their long, slender neck is one of their most striking features. On average, they grow to about 5 feet high and males weigh up to 33 pounds while females often get to be about 25 pounds.

The wings of this animal are spectacular, long, and mostly white. This combination is a big part of their extraordinary beauty, especially when fully spread out.

This animal is originally from Central Asia and Europe, although they spend the winter in Africa, Korea, and India; they can’t stand the cold. Several specimens arrived in North America during some of their migrations and settled there. They’re an established species in these countries now.

One can spot most swan specimens in the area from Great Britain to Asia, although they always migrate south before low temperatures begin.

These birds like stability and prefer to stay in one place, either where they lay their eggs or in some other place of their choice — they take various factors into account for its selection.

The behavior of a most graceful animal

Swans like to live in small groups. When they travel in search of a milder climate they usually do it in groups at a speed of about 60 miles per hour.

To take flight, a swan must propel themselves with their legs. This is because it’s one of the heaviest flying birds. Still, they do so quite gracefully. Watching them take off is definitely a thing to admire.

The courtship is reciprocal. Both males and females begin to move at the same time. Then they begin to swim together, dipping their beaks in the water several times, and then crossing each other’s necks as a “push” to the mating act. Does it seem like a dance to you? Well, now you know why Tchaikovsky named his ballet Swan Lake.

Surely you’ve seen many images of swans joining their heads and forming a heart. That’s why, as we said at the beginning, they became a symbol of eternal love. Once they’re done mating, they stay together for life. That is, they’re monogamous – something not so common in the animal world.

Surely you enjoyed reading about this beautiful animal. Have you ever heard of The Ugly Duckling? It’s the story of how a rather ugly little bird who grew to be a rather graceful animal that amazed everyone who came across them.

9 Spots for Bird Lovers
If you love birds, don't miss this article! We'll give you the best spots for bird lovers to watch these beautiful animals. Read more »
Link copied!
Interesting Articles
Mammals
What Is an Animal Generation?