The Fossa: An Unusual Predator Found in Madagascar

The fossa is such a vicious predator that locals in Madagascar don't even want to say its name. They say it's a devil that kidnaps children...but that's not true, of course. It's just a carnivorous predator--the most dangerous on the island. 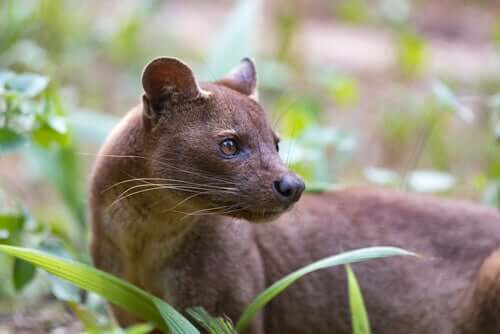 Can you believe that an animal that looks as nice as the fossa is actually one of the main predators in Madagascar? Keep reading to learn more about this vicious carnivore.

Their scientific name is Cryptoprocta ferox and they’re carnivorous mammals native to the island of Madagascar. They have a lot of similarities to cats, but they actually belong to the Eupleridae family, which are all native to the area.

They’re the dominant predators on the island because there aren’t really any other carnivorous mammals there. They’re also the primary hunter (after human beings) of lemurs.

Their large size (up to two times bigger than a house cat) is due to a phenomenon known as island gigantism. It’s an evolutionary response that happens with isolated species that have no natural predators or competitors in their environment.

Physical characteristics of the fossa

Male fossas are a bit bigger than females, and can reach around 31 inches in height. Females can reach something like 28 inches. Their tails can be nearly a yard long, and males tend to be about 19 pounds, females about 12.

Both sexes have short hair that might be reddish, tawny, or brown. Their heads are small compared to the rest of their long, muscular bodies. That’s something they have in common with mongooses, their close relatives. They also have big round ears, a dark nose, buggy brown eyes that allow them to see at night, and whiskers all over their face.

One of the most unusual characteristics of the fossa is their external genitalia. Males have a penis between their back legs. On the other hand, females have something called “transient masculinization,” from about 1-2 years old. This leads them to have an enlarged clitoris that might be mistaken for a kind of penis.

They have retractile claws on their paws (like cats). Their bare paw pads allow them to hold on tightly to rocks and branches. They have a plantigrade walk, and can jump from tree to tree to capture their prey.

The behavior and reproduction of fossas

Fossas are mostly nocturnal, and like to hide in dry forests where there’s lots of space between the trees and lots of bushy vegetation around. They hunt lemurs by jumping on top of them, and also catch birds in flight. They occasionally eat amphibians, insects, reptiles, and even small mammals.

They’re solitary and very territorial. Fossas mark their territory with secretions that come out of their sweat glands. That’s true with both sexes, and it’s the female that decides which “suitor” can come to mate with them. In fact, females sometimes leave their partner during the middle of the sexual act.

The number of babies they give birth to can vary. The babies are born without fur or teeth and are completely dependent on their mother until they’re one year old. A young fossa is usually grey or white, reaching sexual maturity at three, at which point it can start to reproduce.

Conservation of the fossa in Madagascar

Because of their behavior and appearance, people in Madagascar see the fossa as a “devil.” There are many legends about this animal, and one of the most popular is the one that says they kidnap babies at night.

This has led many people to hunt or kill them the moment they see them, and the local government has had to step in to try to protect them. Hunting and the destruction of their habitat are one of the main causes of their dwindling population. Researchers estimate there are only 2,500 left in the wild.

Their reputation doesn’t really line up with their actual behavior. Fossas are relatively docile and some people even keep them as pets. They can actually be very affectionate with their owners, and can live up to twenty years in captivity.

Like most of the animals on the island of Madagascar, the fossa is a very strange creature.

The Impressive Wildlife of Madagascar
Madagascar is considered one of the most biodiverse countries in the world. Learn all about some of their species in this article! Read more »
Link copied!
Interesting Articles
Amphibians
The Differences Between Toads and Frogs