The Great Biodiversity of Mexico's Fauna

Mexico's fauna consists of birds of prey, large cetaceans, poisonous reptiles, insects, and other mammals such as the grey wolf. Therefore, we're talking about an ecosystem of great biodiversity. 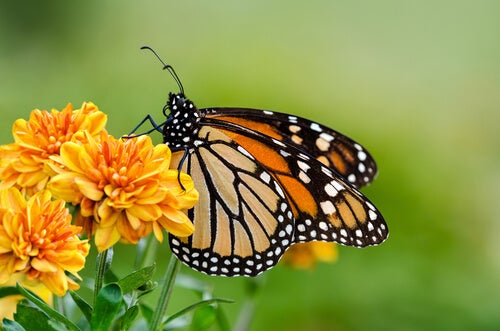 This North American country, with some 386,100 square miles of territory, is home to thousands of species of animals and plants. In fact, it’s among the 12 most diverse nations in the world. If you want to get to know about some of the creatures that make up Mexico’s fauna, keep reading this article.

How is the fauna of Mexico?

With more than 700 known reptile species, nearly 450 mammal species, and almost 300 amphibian species, Mexico’s fauna is truly impressive. Some of its most famous animals are:

This insect – which appears in this article’s cover photo – makes one of the most beautiful migratory journeys in the world (almost 3000 miles long) and one of its ‘stops’ is in Mexico, where there are even several sanctuaries that allow us to observe thousands of specimens at the same time. It’s very resistant to winter and can live up to nine months in this area.

The monarch butterfly can reach up to 4 inches long and has very striking orange wings with black lines and white markings. To differentiate between males and females, you only have to look at those dark ‘stripes’ – the males’ are thinner.

The golden eagle isn’t endemic to this nation, but it’s important on an ecological and cultural level. Like other birds of prey, the males are smaller than the females (they can reach 12 pounds and a wingspan of 6.5 feet). However, they both have the same plumage: dark brown with gold on the neck and head, and white on the shoulders and end of the tail.

These birds are monogamous, hunt from the air, and feed on mice, hares, rabbits, snakes (as you can see on the Mexican flag), and even larger animals such as foxes and goats.

This wolf subspecies is another important part of Mexico’s fauna and is the smallest of the Canis lupus family. It’s 31 inches tall and 53 inches long, and can weigh a maximum of around 100 pounds. From a distance, it can look like a medium-sized dog.


The Mexican gray wolf is characterized by its thick coat, large, straight ears with rounded tips, bushy tail, and narrow, angular head. It can be found in the Mexican and southern deserts of the United States and its diet is based on deer, hares, rodents, and peccaries. It has nocturnal habits and is in danger of extinction.

This is one of the largest mammals in the world and makes a long migration from Mexico, where it gives birth in winter, to the Bering Sea, where it feeds during the summer. During its stay on the Mexican coast, it really is a wonderful natural spectacle to witness.


Over 50 feet long and 20 tons in weight, the gray whale feeds on krill and reaches sexual maturity at the age of eight. After mating, the female is ‘pregnant’ for 13 months and gives birth to a single calf. She keeps it by her side until it’s two years old. Males don’t intervene in looking after the young and can copulate with several females during mating season.

This poisonous reptile is another of the animals that make up Mexico’s fauna. It measures about 7 inches, with a scaly body that has protuberances that make it even more dangerous.

Once the venom is injected, it can cause progressive paralysis of the body, breathing problems, and even blindness. Even so, it was highly revered by the Mayans, and can be seen carved in various temples.

Snakes in Ancient Cultures
While many people are afraid of snakes, these animals were actually revered in the past. We'll tell you about snakes in ancient cultures. Read more »
Link copied!
Interesting Articles
Mammals
Differences Between Asian and African Elephants