The South China Tiger on the Verge of Extinction

The South China tiger is one of the most threatened tiger subspecies due to its almost complete eradication from the wild. Learn more. 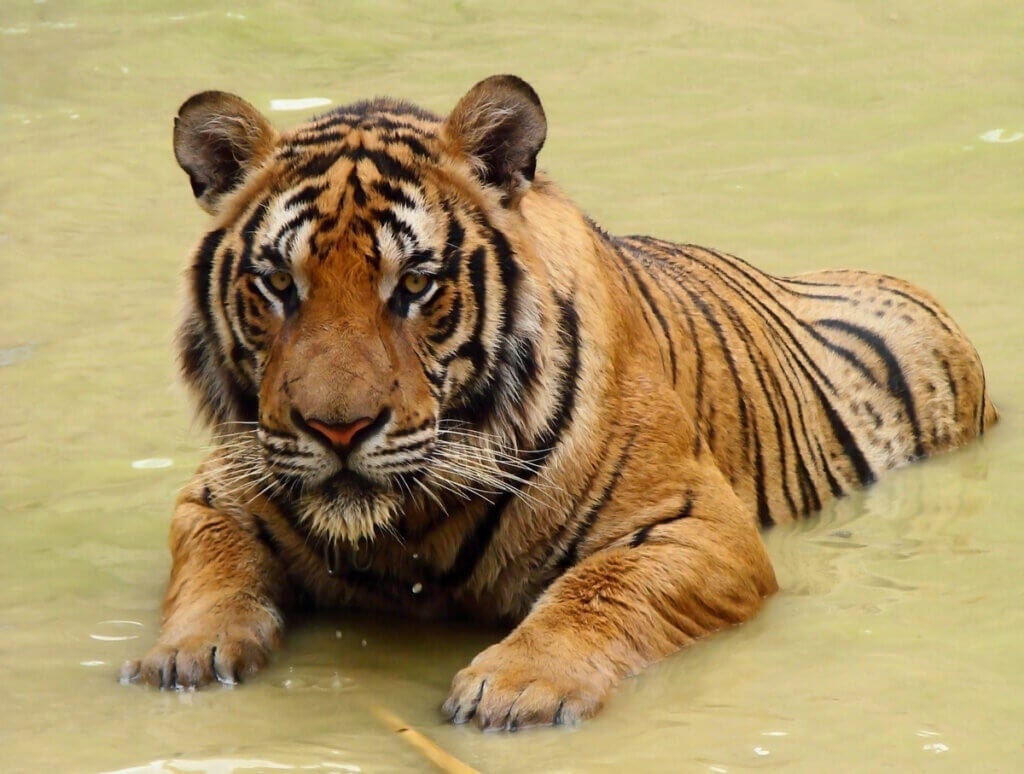 Many big cats are categorized as threatened species, but, for some species, the situation is even more worrisome. The South China tiger is one of the most threatened tiger subspecies according to the International Union for Conservation of Nature (IUCN). That’s because it’s currently in critical danger of extinction.

Beyond anecdotal reports by farmers, scientists believe this cat is possibly extinct in the wild. What’s more, the individuals that are still alive today are in captivity, with a fairly low total population number.

In 1905, zoologist Max Hilzheimer described the first South China tiger in Hankou, a province in southern China. It looked very similar to the Bengal tiger, but was a little smaller.

Its original habitat was the forests with dense coverings, where its preys were abundant. These included wild boars, hares, peacocks, deer, and porcupines. As soon as human settlements began to invade its territory, the South China tiger began to feed on livestock, which caused its decline.

Its distribution was quite wide, as these tigers occupied more than 1240 miles of land, spreading from east to west and north and south throughout all southern China. However, the destruction of its habitat and the hunting of these animals reduced its population by a large percentage.

The causes of their disappearance

For a long period of time, locals considered these cats a plague and the government of Fujian province ordered their eradication. As a result, of the 4000 specimens estimated in 1959, there were only about 200 left in 1977. This is when the government finally revoked the hunting order.

Their representatives now survive in zoos, so, according to estimates, only 1% of the original population remains today. Inbreeding -reproduction among relatives- is high and there’s also cross-breeding with other subspecies. This means that the genetic variety is quite poor, which makes the full recovery of the subspecies very difficult.

For more than twenty years there have been no confirmed sightings of the tiger in the wild. Therefore, its status in the wild is possibly extinct.

In 1981, the CITES convention classified the South China tiger as an endangered subspecies. And, seven years later, the Chinese government included it in its list of protected animals. In the zoo of Canton, the preservation of cells of this feline has begun in order to avoid its definitive disappearance, which experts estimate will occur in the short or medium term.

Organizations such as “Save China’s Tigers” and “Chinese Tigers South Africa” joined forces to send ten captive specimens to a special enclosure in South Africa. The objective is to prepare them for reintroduction into their original habitat. In this enclosure, the animals receive training to survive in the wild.

Their rediscovery in the wild would place the South China tiger on the list of the ten animals most at risk of disappearing from the planet. What’s more, it would occupy the first position among the most threatened felines in the world, even ahead of the Iberian lynx.

This is one of the subspecies that maintains the most primitive features within the tiger family. That is, its body characteristics remind us of the common ancestor of these cats, which lived at the end of the Pleistocene in southern Siberia.

It’s a small tiger, almost 8 feet from head to tail. Males can weigh up to 375 pounds and females around 265 pounds. Its coat is bright orange, with fewer white areas than other tiger subspecies. It also has fewer black stripes, which are further apart from each other than in the rest of the tigers.

The tiger, the most endangered cat of all

Big cats occupy the highest place on the food chain, since they are the most powerful living beings on the planet. However, for this reason, they’re also the most vulnerable.

The disappearance of their habitat and poaching are their greatest threats. Many species like the South China tiger are reduced to zoos, where they try to recover their numbers by breeding in captivity and reintroduction.

The tiger is the most threatened of the big cats, as its population has decreased by 95% in the last century. It only occupies 7% of its historical territory and its total number is in continuous decline. At the beginning of the 20th century, the population was estimated at 100,000 individuals. Today, however, this number is less than 4,000.


As we’ve seen, the data are really alarming for the species. If their threats are not stopped in time and investments aren’t made in their conservation, many tiger subspecies will become extinct in a short time.
Characteristics of the Tasmanian Tiger
The Tasmanian tiger, also known as marsupial wolf, thylacine or Tasmanian wolf was a marsupial mammal that lived until the 20th century. Read more »
Link copied!
Interesting Articles
Birds
Discover the Emblematic Red Kite