What Animals Live on the Canary Islands?

Just like on the Galapagos Islands, many of the animals that live on the Canary Islands are endemic. In other words, you won't find them anywhere else. There are more than 3,600 of these, including reptiles, birds, and mammals like the bat. 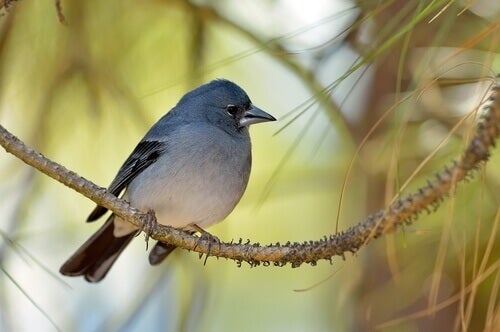 Which animals live on the Canary Islands?

Currently, this Spanish archipelago is home to more than 12,000 land and 4,500 marine species. Among them, we can find about 3,600 that are endemic. However, in the past, there were many more. Unfortunately, many have become extinct, including turtles, lizards, and giant rats. Among the animals that currently live on the Canary Islands we find the following:

The Tenerife blue chaffinch (Fringilla teydea) appears in this article’s main photo. It’s a native bird of the island and, at the same time, it’s the symbol of Tenerife. As its name indicates, it’s blue in color (only the males, since the females are gray), and has a robust body, with a small but thick beak.

This bird feeds on pine seeds and insects. Females build their nests in the branches of the trees and each season -from May to July- they lay two eggs.

The most representative lizard species on the Canary Islands is undoubtedly the Gallotia stehilini -its scientific name- which reaches 31 inches in length. It has a robust grayish-brown body, and darker areas on its head.

This reptile is omnivorous, since it bases its diet on leaves, seeds, flowers, arthropods, and vertebrates such as small mice. The Gran Canaria giant lizard is preyed upon by the raven and the owl. Its defense strategy is to flee, as it’s quite fast.

On the Canary Islands there are thousands of medium-sized, light-colored bats, whose main characteristic, as their name indicates, is their large ears that can measure up to 1.6 inches. If we take into account that their bodies often don’t exceed 2 inches, they are indeed big-eared bats!

Female specimens are larger than males, and young bats have a darker coat than adults. This bat is endemic to the Canarian archipelago, living in the pine forest, caves, and abandoned buildings.

Another of the lizards of the Canarian fauna is the El Hierro giant lizard, which inhabits only this island at present. It’s almost extinct due to the introduction of foreign species and human activity. Today, we can find strongholds with several specimens on the cliffs and rocky hills off the coast.

This lizard can measure about 23 inches and is dark brown, black, or gray. However, its belly is lighter. It feeds on plants and insects –it’s omnivorous– and is preyed on by birds of prey such as buzzards and kestrels. As for its reproduction, we can mention that, each season, females lay between 5 and 13 eggs, which hatch two months later.

This is another animal that lives on the Canary Islands and which is endemic. The stonechat is mainly found in Fuerteventura and its population is gradually decreasing. This is due to the destruction of its natural habitat, grazing, and the introduction of domestic cats.

This small bird with a robust body has brown feathers on its wings, orange coloring on its chest, and white feathers on its neck. The head is brown with white details around the eyes. The beak is small so that it can feed on seeds and insects (which it hunts while in flight) without difficulty.

The Fauna of the Galapagos Islands
There are many exotic animals on the Galapagos Islands. We'll tell you about some the amazing fauna that live on these islands. Read more »
Link copied!
Interesting Articles
Mammals
All About the Caracal: Characteristics, Feeding and Habitat