The Fastest Land Animal in the World

Able to reach 70 miles per hour, an incredible speed for a land animal, the cheetah has powerful muscles that give them extreme agility. In addition, they are smart, effective, and efficient hunters. 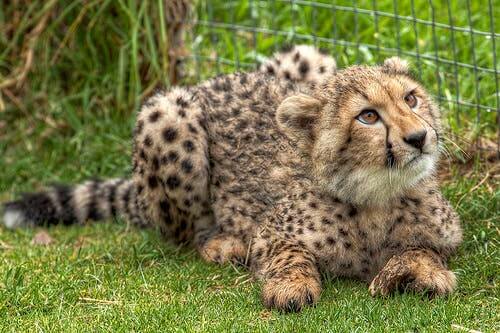 The cheetah is the fastest land animal in the world. They can reach 70 miles per hour in only 545 yards. This big cat is one of the most impressive animal species in the world.

Cheetahs: the fastest animal on land

All animals have characteristics that make them special. In the case of the cheetah, their most outstanding quality is speed. This big cat, which can also be a social animal, is capable of reaching 70 mph, but how do they do it?

The cheetah (Acinonyx jubatus) is a speed machine. In fact, thanks to this great quality, they can hunt and survive. They belong to the family of felids, mammals that have developed the ability to be extremely stealthy in order to be more successful when hunting.

What makes cheetahs the fastest animal?

The physical characteristics of the cheetah are the key aspect that allows them to be the fastest animal on earth. These characteristics are essential to quickly reach high speeds.

The cheetah can reach between 3.5 to 5 feet in length. They are slender and their limbs are very developed. As a result, this allows them to reach great speeds.

One key physical aspect of cheetahs is their tail. Their tails can measure between 1.5 and 2.5 feet. They work as an anchor. In fact, the tail allows the animal to maintain balance at all times. This is especially true when chasing potential prey.

Another one of the most important factors that allow cheetahs to reach high speeds is the size of their heart. Cheetahs have the largest heart in the cat family, and it allows them to pump blood much more forcefully to all corners of their bodies.

Cheetahs also have very large lungs, as well as large nostrils. This makes it easier for them to absorb oxygen and maintain high speeds.

Other characteristics of cheetahs

The powerful muscles of cheetahs, along with a large heart and lungs, create the ideal combination that allows them to reach up to 70 mph.

In addition to their strength, the flexibility of their backs and claws give extra stability while maneuvering. This is particularly important when cheetahs are forced to change direction while chasing prey.

Several studies also show that cheetahs are not only extraordinary for reaching high speeds, but also when it comes to stopping abruptly.

Researchers have found that animals can reach 6 mph in just ten feet and stop in a single step. They can stop suddenly even if they are at a speed higher than 8.7 mph.

Being able to stop quickly, even when at a full run, is one of the qualities that make cheetahs extraordinary hunters. This allows them to make very sharp turns and change direction according to the path of their prey.

In addition to having a powerful hunter’s body in their favor, cheetahs also use intuition to increase the chances of hunting success.

However, this feline usually hunts during the main daytime hours. As a result, they have less competition since most other predators and scavengers are usually sleeping at those times.

Another great quality of cheetahs is their powerful sight, combined with significant patience. This allows them to wait and observe their victims from great distances.

This feline generally climbs trees or moves to high ground to observe their prey. Unlike other cats, cheetahs don’t rush to hunt. However, when they do decide to start chasing their prey, they tend to be successful.

The cheetah is the fastest animal on land in the world. They are also one of the most extraordinary specimens that exist. Their perfect anatomy makes them great hunting machines. As a result, they’re one of the most successful feline hunters. Speed, big muscles, a big heart, and intuition are features that define this powerful animal.

Cheetah Conservation and Genetic Traits
Cheetah conservation is vital for the survival of this species. Amazingly, it's its own genetic makeup that threatens to destroy it.  Read more »
Link copied!
Interesting Articles
Mammals
The Puma Is The Great American Predator