Incredibly, all of these animals have adapted to be able to survive in adverse weather conditions. Mollusks, insects, crustaceans, mammals, and birds all live there. 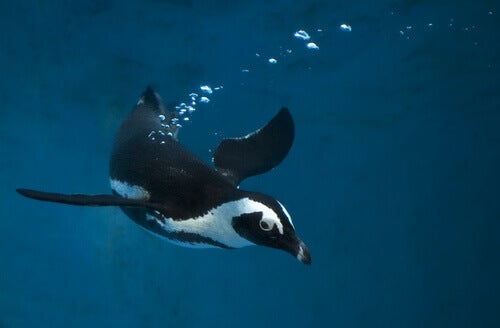 Can animals live in a place where everything is icy, snowy, and windy? Believe it or not, wildlife in Antarctica has adapted to all these extreme conditions. In fact, these animals take advantage of the resources in the environment. Let’s learn more about the species that inhabit the white continent in this article.

Located in the southern hemisphere and twice the size of Australia, Antarctica is the coldest, windiest, and driest continent on the plant. In fact, the average temperature is usually around -76 degrees Fahrenheit! However, despite these adverse conditions, several animals – and some tundra plants – have been able to adapt and survive:

This is one of the species of penguins that inhabit Antarctica. Other species are Rockhoppers, Adelaide, Chinstrap, Papua, and King. These are also the largest of the entire Spheniscidae family. These penguins have a white chest and a black body. In fact, some people say they look like they’re wearing a suit. However, the chicks are grayish in color.

Penguins can’t fly, but they have stiff wings adapted to the marine habitat. In fact, they’re expert swimmers. These animals can also reproduce in the desolate Antarctic winter. The female lays one egg per season. Then, the male transports the egg by walking up to 60 miles along with other parents.

These seals live in Antarctica, but also in Southern Argentina, and Chile. According to their sex, they’re different colors. The adult males are brown, while the females are gray. In addition, the males can weigh 500 pounds and measure up to 6.5 feet. On the other hand, females don’t exceed 110 pounds and 4.5 feet.

Several of the Antarctic marine species feed on this tiny crustacean. However, these small animals are no more than 2.5 inches long. They also live in schools that reach up to 30,000 specimens. These animals stay in water that has a temperature of between 30 to 40 degrees Fahrenheit.

This is the only insect of the family that can survive in such a cold and extreme environment. The Belgica Antarctica – its scientific name – is an endemic species in the region. They also have the honor of being the only completely terrestrial animal on the white continent.

These insects have the ability to stay alive even after two years of freezing their body fluids. They also can survive not breathing oxygen for a month. They’re dark in color in order to absorb all available heat.

This bird is entirely white, except for its small black beak. They’re about 16 inches long. However, they almost double in size when their wings are spread in mid-flight. This is one of the characteristic species within the fauna of Antarctica and the South Pole.

These birds lay one egg per litter and incubate the egg for 49 days. Snow petrels feed on fish, mollusks, and even carrion. They also can live up to 20 years.

This is one of the largest invertebrates, together with the giant squid. They can reach up to 45 feet long and weigh 1650 pounds. A lot of this animal’s body is made up of two long prehensile tentacles, as well its eight shorter arms.

The sexual dimorphism of the colossal squid is such that the female is three times the size of the male. They also have more robust bodies. However, very little is known about this animal that inhabits the Antarctic region. They feed on plankton and small squid.

This seal lives in large herds in the southern hemisphere and Antarctica. They don’t migrate, but they do move within the region in search of food and shelter. These animals can withstand the cold due to large layers of fat that line their bodies. The males are also smaller than females.

These seals have the ability to dive up to 650 yards in frozen water. They can also hold their breath for almost an hour due to the large amount of myoglobin that accumulates in their muscles and blood. They feed on squid, cod, and other marine species.