Antarctic Krill: A Tiny Organism With an Enormous Job

Accustomed to living in subzero temperatures, this crustacean makes up part of the diet of many cetaceans. Antarctic krill are pale red in color and very tiny. What's more, they have the ability to glow when light shines on them (bioluminiscence). 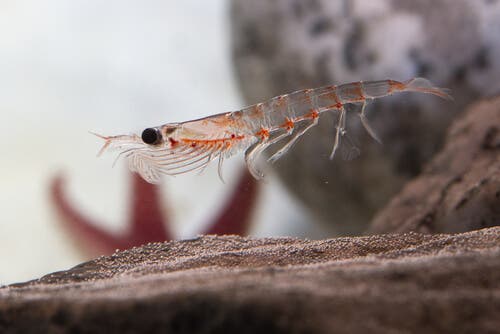 The continent of Antarctica is characterized by being the coldest territory on the entire planet. In the southern hemisphere, temperatures have gotten as low as -128° F and ice covers 98% of its surface. In such a remote region of the world, surrounded by a great deal of water and very few inhabitants, the animal ecosystem is just one of the particularities of Antarctica… especially because of Antarctic krill.

Given that this is the coldest region of the planet, animals are scarce. Only animals that are able to withstand the frigid glacial temperatures live there. With very little exposed land and so much ice, the biodiversity includes only maritime organisms.

That’s why penguins, whales, orcas, squids, seals, walruses are so abundant on this continent. And the species that we see the most here is the Antarctic krill.

Characteristics of the Antarctic krill

The Antarctic krill is a crustacean that belongs to the Euphausiidae family and the Euphausia genus. This animal organism is specific to the waters of Antarctica and is the most abundant species in the region. Based on estimates, between 100 and 420 million tons of these creatures exist (measured in biomass rather than units).

Colloquially, Antarctic krill are also known as Antarctic shrimp. This is because of the great similarity between their physical appearance and that of shrimp. Therefore, it’s very easy to mistake them for shrimp.

This crustacean is pale red in color and is very small. It can measure just 2,4 inches long and weighs an average of 0.071 ounces.

Perhaps the most distinctive and interesting characteristic of this species are their bioluminescent organs. These organs, which emit light, are located throughout the animal’s body and produce blue fluorescent light. Thanks to this characteristic, the animal has earned the nickname “light-shrimp”.

A semi-hard shell–or exoskeleton–covers the upper part of the krill’s body. From its thorax extend six pairs of appendages all the way down to its tail. And the head of the krill includes two antenna and compound eyes.

The life cycle and reproduction of Antarctic krill

Krill can live between six and seven years. After two years of life, these crustaceans will have overcome the stages of change in their bodies. In other words, they have reached adulthood and sexual maturity.

Reproduction among this species takes place through mating. Males have a reproductive member and use their front foot to hold onto females. When mating, the two animals come together and the male attaches its sperm to the female genital region.

It’s worth mentioning that the reproduction period for krill takes place between January and March. Once they’re finished mating, females lay their eggs near the surface of the water. After a few days, the eggs fall to a depth of some 9800 feet (1.86 miles) below the surface. And this is where the fertilization process comes to an end.

Some 10 days after the laying of the eggs, the larvae hatch. In this state, the animals still don’t eat. In fact, it’s not until three weeks later when they turn into small krill. It’s interesting to note that females among this species are capable of laying between 1000 and 10,000 eggs at a time.

Krill only feed on phytoplankton, which is a marine species. However, other animals, the few people that inhabit this region, and continental fishermen see this crustacean as an ideal food source.

It turns out that Antarctic krill possess incredible characteristics and nutritional benefits. They offer a high protein content, making them very desirable prey. And not only for animals in the southern hemisphere, but also for fishermen and the few humans that inhabit the region.

Antarctic krill possess a large number of minerals, such as phosphorous, zinc, sodium, potassium, and calcium, among others. What’s more, thanks to the fibers in their body, they produce a very beneficial antioxidant action when digested.

The animals that hunt krill include penguins, sea lions, seals, walruses, fish, squid, and others. Currently, it’s also a crustacean that’s consumed massively in Asia. Little by little and thanks to the knowledge of its benefits and culinary uses, Antarctic krill are being exported to numerous countries around the world.

The Blue Whale: The Largest Living Animal
The blue whale is the largest animal that has ever lived on our planet. Some scientists say it's even larger than any of the dinosaurs we know of! Read more »
Link copied!
Interesting Articles
Invertebrates
Discover the Golden Tortoise Beetle