Sea lions belong to the family of seals and walruses, and live all over the world, but always by the coast 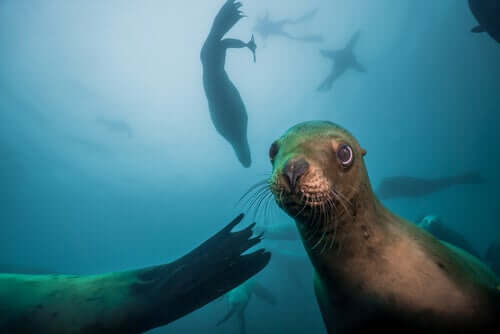 In the following article we’ll tell you about the characteristics, behavior and habitat of fascinating sea lions.

Firstly, sea lions and sea wolves aren’t the same. Sea lions are bigger, for a start. At the same time, they are both different to the seal, which has less thick skin and more fur, although of course they all belong to the group of pinniped mammals.

The sea lion’s body has adapted so that it can retain its body heat even when submerged in water and at low temperatures. This is because it has a very thick layer of fat beneath its skin (just like other animals such as polar bears), which it uses to store energy and provide power to move easily through the water.

They can dive around 650 feet deep and only need to come up for air after about 40 minutes and can swim up to 25 mph. However, on land they’re much slower, and spend many hours sunbathing, giving them the nickname ‘lazy’.

Their diet also needs to be mentioned. They are carnivores and eat a variety of different animals, such as squid, different species of penguins, fish and even baby seals or birds.

Despite its large size, this animal is the prey of killer whales and large sharks. They may lose the battle against the former, however, some sea lions manage to escape from the latter, because they have a technique where they tire out the predator to the point where they give up.

Sea lions live in colonies, and one of the most striking traits is that they lie very close to one another to keep warm, even though they have plenty of space. They only attack each other for territorial reasons and, of course, during the mating season.

On the topic of reproduction, males are polygamous, meaning they mate with many females, and don’t share them with other males. When the male arrives at the coast, he defines his territory and females join his group.

Another interesting fact is that females give birth after 11 months, so they give birth to a calf conceived in the last season and conceive again almost immediately.

This creature can be sighted all over the world. We can find sea lions in New Zealand, Japan, Mexico, Galapagos Islands or Canada. Below are some species:

This species is very intelligent and is therefore a popular choice for theme park shows. As its name indicates, its natural habitat is the Californian coast, but it can also be found in Alaska, Canada and Mexico.

Interestingly, it’s still a fairly social and non-aggressive animal. They also use their swimming strengths for survival by hunting hake, sardines, squid and red octopus.

The largest of the sea lions, known for its majesty and beauty, as well as its remarkable sexual dimorphism; males are much taller and more robust than females. They live in the North Pacific, between Russia and Japan and also in Alaska.

Males can measure 8.8 feet and weigh 770 pounds. Both sexes have brown fur, but the young are darker. They live on both coasts of South America – Argentina and Chile. They rarely venture into deep waters, therefore they feed on crustaceans and cephalopods close to the shore.

This sea lion is one of the least known to men. They’re a small colony that lives on the inaccessible islands of southwestern Australia. They don’t migrate, and live all their lives within a range of around 150 miles.

10 Species at Risk of Extinction
Sadly, mankind's actions mean that hundreds of species are at risk of extinction. Today, we want to take a closer look at 10 of the most endangered species. Read more »
Link copied!
Interesting Articles
Mammals
Types and Characteristics of Asian Elephants